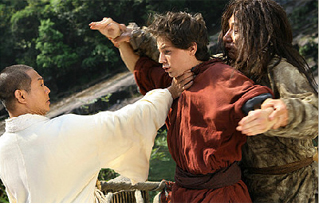 The big-screen battle between the two greatest kung fu masters is finally here.
The rapid-fire martial arts combat between Jet Li and Jackie Chan was worth the wait, even without Coke and popcorn.
“The Forbidden Kingdom” tells a coming-of-age story about a boy, Jason Tripitikas (Michael Angarano). His tale starts in Boston, where he doesn’t have the guts to stand up to neighborhood bullies, then ends up in an epic battle against a dominating evil army. Can he prove a worthy match for the ruthless Jade Emperor who’s imprisoned the peace-and-justice-loving Monkey King?
The Monkey King is based on the ancient fictional Chinese character Sun Wukong from the novel “Journey to the West.” However, the plot of this story deviates from the original text. In the original story, the Jade Emperor isn’t an evil warlord, but one of the most important gods.
The movie hearkens back to many old-time Chinese kung fu movies, even pre-Bruce Lee. It brings back old memories of funny close-ups of men in heavy makeup. But compared to kung fu of yesteryear, these rapid-fire fight scenes are completely 21st century.
There are so many hidden goodies within the film for lovers of Chinese martial arts films, one of which is Chan’s role as Lu Yan, the Drunken Master.
“Drunken Master (Jui Keun)” was a 1978 film that brought Chan international fame. In the original, Chan learns how to fight from a boozehound. In The Forbidden Kingdom, Lu Yan is the spitting image of the 1970s drunken master as he trains the young Jason.
Jet Li plays a silent monk, a fitting role considering his debut as a Shaolin monk in the 1979 film “Shaolin Temple.”
The White Witch, with her deadly white hair, alludes to the famous leading character of the 1993 film “The Bride with White Hair (Bai fa mo nu zhuan),” which stars the late Leslie Cheung and Brigitte Lin.
The relationship between Lu Yan and Jason was reminiscent of Mr. Miyagi and Daniel in “The Karate Kid.” There’s more to these lessons than “wax on, wax off,” though, with moves like “the drunken fist,” “crane,” “mantis” and “tiger.”
The Forbidden Kingdom also gives the audience the chance to see Chan play an old pawn shop owner and Li as the Monkey King himself.
It was pretty obvious that Li, who typically plays serious roles, sort of let himself loose in the goofy department, a move that Chan is better known for. But I just thought it seemed awkward.
In general, it’s hard to take this action-packed movie seriously. It’s especially hard to take the evil Jade Army seriously when they’re decked out in colorful eye shadow fit for Britney Spears.
Let’s not kid ourselves: This isn’t Academy Award-worthy material, even when Chan’s character gives an emotional self-sacrifice. The Forbidden Kingdom has a plot that’s all too common in Hollywood.
What makes this movie appealing is the kung fu. It’ll satisfy the appetite of the most voracious martial arts addict.
English speakers should know the Chinese bits only have Korean subtitles. But rest assured, it won’t make a big difference.