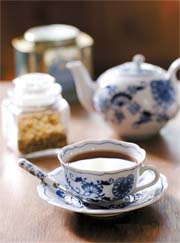 It’s everywhere. It’s official. Afternoon tea is in. Shrimp crackers are out.
High tea is now found in Seoul from Baskin Robbins with its latest spring menu to the city’s hottest new cafes for trendsetters.
Uniquely, the culture of afternoon tea here is more American than English, cosmopolitan rather than formal or classic.
Instead of older, high-society ladies who pass time by nourishing themselves with tea and sandwiches, a majority of customers in Seoul’s afternoon tea places are young mothers and single girlfriends out on break from work or family duty.
In fact, some of these customers look better suited to a martini in a trendy bar than a cup of tea.
The food itself is much more casual than traditional sets elsewhere: Instead of scones and sandwiches, many teahouses here prefer to fill their afternoon tea platters with waffles, pies and tiramisu.
But to sip some tea in Seoul, decide on the style part first.
The safest way, if you are overwhelmed by the names of hors d’oeuvres and rituals of tea drinking, is to follow the classic route.
Salon de Thé, located on the executive floor of Lotte Hotel, is deliberately set apart from the hotel’s crowded lobby, which is connected to a department store by an elevator. At a quick glance, the salon looks like a private library. Indeed, it’s meant to look that way.
Over 2,600 foreign books are shelved here, and they are not just there for decoration. When the place opened in 2006, the hotel spent 300 million won ($300,000) just to purchase the books.
“Some people come here for the books,” says Gina Gong, an assistant manager with the hotel’s marketing team. “It was originally designed around the concept of a European library to give the impression that you’ve just walked into a posh office.”
The afternoon set at the salon is deluxe, served in a silver tray carrying a set of Rosenthal china, a selection of teas by Ronnefeldt and a gold-plated hourglass, which measures the time for infusing tea. When the sand in the top bulb reaches the bottom, the tea is ready. 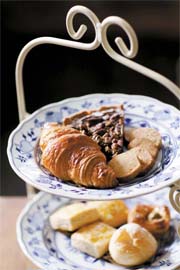 Ronnefeldt, a German brand, is enough to please most casual tea lovers.
But for wider tea varieties, Tea House Tianhua near Ewha Womans University is the place to go.
Run by Japanese tea connoisseur Hideki Kudo and his Korean wife, the place is one of Seoul’s most exclusive teahouses. The husband and wife team blend most of their tea on-site.
The shop carries over 400 varieties of tea, which the couple collect on their travels. The menu, which reads like a textbook with details of added leaves, rotates every few months.
Among the house’s female college clientele, though, a romantic theme seems to always work, as English rose, violet lavender and lychee are steady sellers.
The tray set of snacks at Tianhua is baked in their kitchen. It includes biscuits, mini scones and pastries. The place’s hidden delight, however, is a milk pudding, a soft Chinese-style pudding made of egg, which is popular in Hong Kong where they are called egg pudding.
The tea range at Tianhua is highly unusual, considering that high tea was never treated seriously in Korea.
Until a few years ago, Seoul’s five-star hotels were pretty much the only places for tea lovers to get a decent cup of leaf tea, aside from green tea.
This is a critical difference in the custom of tea drinking between Korean and its Asian neighbors.
Japan adopted high tea culture during the Meiji period (1868-1912). Arthur Groom, an English tea merchant, settled in Kobe in 1868, building the nation’s first golf course, which was on Mount Rokko. By the early 20th century, Japan was producing black tea and exporting it to England. 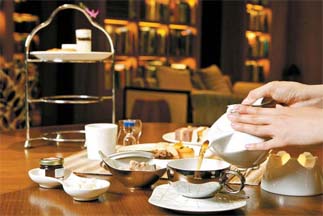 Singapore naturally embraced high tea culture under the British colony. India is famous for Darjeeling tea. Sri Lanka, formerly Ceylon (another famous tea), China and Indonesia are some of Asia’s major tea exporters to Europe and North America today, according to “Happy Afternoon Tea Time,” a book by Kudo, the proprietor of Tea House Tianhua.
But it’s never too late for Korea.
Seoul is quickly joining the Asian league of afternoon tea culture. Using slow hours on weekday afternoons, more and more cafes and restaurants in trendy neighborhoods like Samcheong-dong and Cheongdam-dong are introducing an afternoon tea menu.
The presentation of the platter is jaw-dropping in some cases.
Queens Park, an organic restaurant-bakery in Cheongdam-dong, offers a tea set with a tray full of hors d’oeuvres and a dessert menu that includes tea sandwiches, macaroons, tarts with green tea frangipane, chocolate éclairs and classic English scones with butter and homemade jams.
The restaurant adds a dose of urban glamour by adding sparkling wine to the tea set for an additional 10,000 won.
At Park Hyatt, noted as the city’s utmost cosmopolitan hotel, afternoon tea sets come in two types.
On weekends, a buffet of flavorful French desserts adorns the counter of its open kitchen. Dishes include Grand Marnier and Bourbon Vanilla ice cream, Belgian waffles with chocolate sauce and crème brûlée. If this is too heavy, a simplified afternoon set is available at The Lounge during the weekdays.
A Priori Thé, which opened in March on posh Garosu-gil, is also a tea shop that prides itself on style and delectable pastries.
As an unusual rendition of the afternoon tea set, the shop offers hand-made truffles from their exclusive chocolatier as part of their tray. 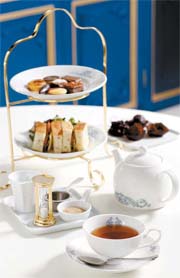 An afternoon tea set at A Priori Th?in Sinsa-dong on Garosu-gil. By Kim Hyeon-dong

But if you don’t mind the bland taste of teabag and are in the mood for something more casual, you could skip all of the above, and head straight to your nearest Baskin Robbins for their special promotion of an afternoon tea set, available all day.
Sipping tea with their special cream puffs filled with mint chocolate ice cream and other scoops sandwiched between waffles, it’s hard not to smile at their American sense of humor mocking English arrogance and the unruffled craze in Korea that fashionably mixes the two.