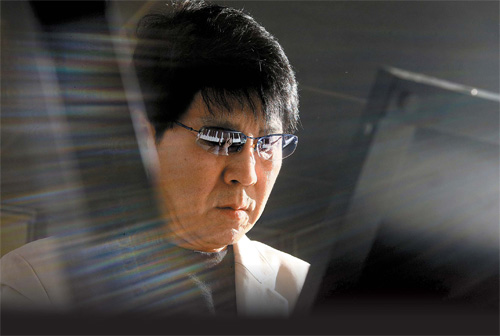 Some say a picture is worth a thousand words, but for Cho Yong-pil, it’s music.
This year the king of Korean pop celebrates his 40th anniversary in show business.
After his debut hit single in 1968, he’s notched up several firsts. He was the first Korean singer to perform at Carnegie Hall in New York, the first in 1994 to sell 10 million albums in Korea and the first pop singer to grace the stage at the Opera House at the Seoul Arts Center in Seocho-dong.
At a recent Q&A, eight prominent figures from the world of culture and entertainment, including a music critic, a poet, a writer, a producer and a singer, asked Cho about his career.

Q. What did you think about our selection of your greatest hits? — Lim Jin-mo, music critic (The JoongAng Ilbo asked the group to select Cho’s greatest hits earlier this year.)
A. I would have liked to see “Heogong (Empty Sky).” (“Empty Sky” was Cho’s mother’s favorite.) But that’s the way it is. If I were to sing all the songs the audience like to hear at concerts, I would have to be there all night. 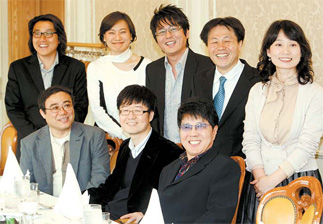 Prominent figures from the world of culture and entertainment meet with Korean pop legend Cho Yong-pil (seated, far right) to celebrate the 40th anniversary of his debut. [JoongAng Ilbo]

What do you sing at karaoke? What was your lowest score? — Lee Jae-moo, poet
The song “Ship that Sails On.” Among my songs, I usually sing “Dream.” Once, I got 58!

It’s been 40 years. Has there been a time when you just hated music? — Ha Seong-ran, writer
Music is my destiny. Of course, there were times when I wanted to run away. Usually, it’s when songs just wouldn’t come out. Songs cannot be forced into being written. That’s why when I hit upon a musical motif or style, I start writing it straight away. Usually, those are the ones that become huge hits. For instance, “Dream” was written on a plane. 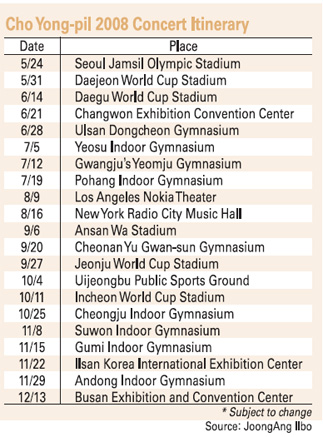 My question is to Shin Seung-hun. If Cho Yong-pil was your fellow singer and not your senior, would you have given him the recognition you give him today? — Joo Chul-hwan, president of broadcasting company OBS
When I first heard Cho Yong-pil’s songs, I was awestruck. His music was something that musicians back then couldn’t even imagine doing. If I were his fellow singer, it would’ve really challenged me to widen the scope of my music — Shin Seung-hun, singer

There were other pop icons in the 80s like Lee Young, Jeon Young-rok and Yun Soo-il. Was there anyone who was a threat to you? — Lim Jin-mo
They all sought completely different styles and tones from me. I never thought they were my rivals. I was just focused on working out a new genre with my band “Great Birth.” I wanted to introduce a new style, tone and expression to the Korean music scene.

I like “Because I Love You” by Yu Jae-ha. Is there any story behind it? — Song Gi-cheol, music critic
Yu was our third keyboard player at that time. We asked Kim Gwang-min, who was our first keyboard player, to find a good pianist. Kim brought Yu, who said he wanted to write music. I told him to go ahead. That’s when he wrote “Because I Love You.” I had a good feeling about it. (Singer-songwriter Yu Jae-ha died in 1987 in a car accident when he was 25.)

Elvis Presley is said to have been “tired of being Elvis.” He is known to have had a separate room where he would just take a break to relieve stress. Tell us about you. — Lim Jin-mo
I was swamped by fans wherever I went. People recognized me from the back of my head. At first, I ignored all that and just ate and drank in street restaurants. But after a while I learned I should control it.
I don’t want my fans to see me drunk or in bad shape. Self-control has become my life now. I don’t even feel the urge to go out in public and do things. I take care of almost everything at home.

I hope to see you surprise us with a smash hit once again. — Shin Seung-hun
I decided to stop appearing on TV in 1992 because I realized it would be hard to produce any more hit songs. I acknowledged my limits. It was hard to appeal to people in their teens and 20s when you are in your 40s. So I let go. I think that’s the key to life — moderation. So I decided to go back to the stage. I started as a guitarist so it was only natural that I return to performing live.
It’s really inspiring to see the Rolling Stones and U2 still attracting tens of thousands of people to their concerts. You don’t see them making TV appearances. But I will continue to produce new albums. I was planning to release my 19th this year. It has been delayed due to my health problems. But it will come out next year. It features a more futuristic style.

You seemed to have been one step ahead of your time. — Yun Seong-a, advertising agent
I always listen to new music, mostly hit songs from Western countries. I knew all the songs that were on the jukebox in U.S. clubs because I went there early, put in the coins and listened to them over and over again. So I knew what was hip at the time.
I think I learned a great deal from musicians from overseas, listening and singing their songs. Even now I usually listen to AFN (American Forces Network). I need to be in sync with the latest trends in world music. I want to do all kinds of musical genres. I think that is why I have such a huge fan base.

Challenge brings out fear. How did you overcome it? — Yun Seong-a
Practice is the only way. It was extremely hard to release new albums on a regular basis, one a year in my heyday. Also, there was that pressure to produce a hit. I practice and practice and I don’t take a break. I start rehearsing for a concert at least a month in advance. So I know what works and what doesn’t.

You’ve reached the top of the music industry. Do you attribute some of your success to luck? — Yun Seong-a
I wasn’t really conscious of my popularity. I just focused on what songs people liked and how they liked to hear them. I think there was luck at work, though. If I had debuted in today’s music industry, would I have succeeded? I think I was able to achieve what I achieved because I was in the right place at the right time.

How do you feel about the 40th anniversary? — Joo Chul-hwan
I am still going, though I didn’t think I would be doing music all my life. I don’t think I would’ve made it this far had it not been for the love and support of my fans. I would like to say thank you to them. But there is not much to be said about the anniversary because I’m still working and have lots of plans for the future.

Cho Yong-pil’s 40th anniversary tour will take him across Korea and to the United States.
The curtain will go up on May 24 at the Jamsil Olympic Stadium in Seoul, and he will visit 24 cities, including New York and Los Angeles, before ending his series of concerts in Busan on Dec. 13.
In line with the mega-star’s nationwide popularity, the scale of the concerts will be unparalleled in Korea. The stage will be huge, measuring 90 meters wide and 40 meters high, the largest performing area ever created in Korea.
Two large pillars will be set up, one representing Cho and the other his devoted fans. Three ultra-large monitors will be set at the back of the stage and to the sides to give the audience a better view. His crew and entourage will number 5,200, more that 1,000 of whom will be responsible for setting up the stage.
Cho will sing 40 of his hit songs divided into chapters of his musical career.
For more information, call (02) 1544-1555 or visit http://ticket.interpark.com.