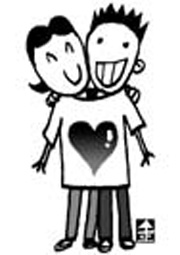 “We are Married” is part of a popular MBC-TV program called “Sunday, Sunday night.”
Its popularity is booming among young viewers, and I hear more singles want to get hitched because of this reality TV show.
On the program, we see four TV star couples playing married couples. The camera follows them as they go about their daily lives as newlyweds.
The show is also popular because a star cast has taken on the main roles, and it won’t be a surprise if similar programs come into vogue.
It’s also interesting that there hasn’t been a great deal of criticism of the show’s content. Despite expectations, few people have reacted negatively to shots of the stars running in and out of bedrooms dressed in only their pyjamas.
What makes the show a hit with young people is they can identify with the characters. There’s a romantic couple, a cool and sexy couple, a cute couple and a realistic couple on the verge of a crisis. The acting and the actual story lines are made authentic by the way the actors draw on their own real-life experiences.
TV star Shin-ae talks about how she has been hurt by string of scandals that have dogged her since she began her career. The attentive Alex shows he is considerate toward his “wife” and helps her to open up about her feelings.
Blending fiction and reality is not new to TV entertainment, and viewers tend to enjoy this kind of blurring rather than questioning it. They even urge the couples to get along with each other, as if the marriages were genuine, rather than scripted.
What is really noteworthy in the program is that it shows the prime time of marriage. Of course, they are temporary couples whose married status will end soon enough.
Viewers know that even if they go through a crisis and experience any of the tensions that newlyweds often encounter, there will be no lasting emotional damage.
For example, comedian Chung Hyung-don, who plays the role of an indifferent husband, will soon repent, unlike real husbands. And if the couple really doesn’t get along, they don’t have to file for divorce. They simply quit the program.
We are Married shows the fantasy of newly weds in the most beautiful and safest of ways, a stark contrast with the reality of marriage, which is rarely this sweet.
Coincidentally, the KBS program “Couple Clinic” shows the convoluted conflict between married couples undergoing marriage guidance, a show that has been on the air for more than eight years.