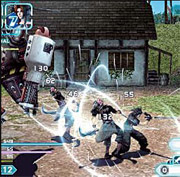 “Crisis Core: Final Fantasy 7” for PlayStation marks the beginning of the Final Fantasy series entering into the mainstream market, allowing console-style Japanese role-playing games to reach a wider audience. It is the best-selling Final Fantasy game, and Square Enix has been milking the cash cow through spin-off games and two animated films.
Calling CC:FF7 an “action RPG” makes one hope that it would have great action game play with an interesting story line, but the game disappoints in both areas.
You’re treated with a classic menu-based combat system combined with freedom to move and dodge in real-time. The point of the menu-based combat system was that your characters are stationary and there is some sense in choosing your actions carefully. When the element of movement is added, it changes the game play to the point of absurdity. To make matters worse, Square Enix has added a roulette system, which adds a sense of randomness. This takes away the feeling of control and it becomes very difficult to gauge the challenge level. Players may become bored from killing everything in a few hits or from throwing fits of rage at dying from one hit from an enemy and then having to start all over again. The game also throws in some attempts at stealth and mini-game scenes, which can only be described as bland and boring.
The only redeeming factor is the famous CG cut scenes throughout the game, but the player is not allowed to view them separately from the game. If you’re willing to endure bland game play to reward yourself with elaborated cut scenes, then this is a game for you. For the rest of the gaming community, this game belongs in the bargain bin.
By Leon Suh