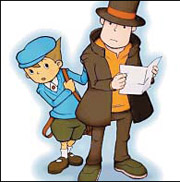 “Professor Layton and the Curious Village” is slowly but steadily creating a sensation among Nintendo DS players. The game is a simple detective story of a professor and his protégé trying to solve a mystery of a dead man’s will. For those used to playing “mindless” games, this one will stimulate a considerable amount of brain activity.
The game is like watching a 2D watercolor animation, similar to Japanese animations such as “My Neighbor Totoro.” Professor Layton and his apprentice are summoned by a rich widow who wants them to look for a golden apple, a treasure that her late husband has hidden somewhere.
The pair travel to the village of St. Mystere, located on an island that can only be accessed by a drawbridge. The professor discovers, however, that there is more mystery lingering in the village than expected. He tries to get clues by talking with the residents of the village. Strangely enough, the villagers all seem obsessed with solving puzzles and want the professor to solve a lot of problems, while giving him leads on the case.
Some of the puzzles are simple, such as moving a match to create a certain pattern. Many, however, are more analytical. This makes it very different from the shooting or arcade games that portable game players are accustomed to.
Puzzle-solving games are not new, although they are not part of the mainstream gaming industry. Adventure games such as “Myst” and “Monkey Island” have integrated challenging puzzles in a more graphically elevated context.
The game offers almost 200 puzzles, but many are very similar, and it will appeal to players who are new to such adventure-style puzzle-solving games and people who do not play games at all, but are interested in testing their analytical skills.By Wohn Dong-hee