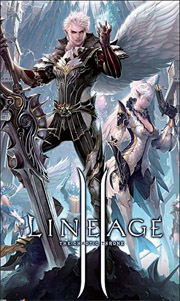 The recently upgraded “Lineage II.” Provided by the company

Korean games are blossoming in the capital of games, Japan.
While many Korean television shows and feature films have lost their appeal, Korean games still remain strong in a market that is awash with top-notch games.
“Ragnarok of Gravity” has been in the top ranks of the Japanese game industry for seven years as of 2007. Last year, Ragnarok sales amounted to 57 billion won ($57 million).
“Red Stone,” developed by L&K Logic, is also a major hit in Japan. Last year, the company earned 50 billion won from the game.
This year, NCsoft’s role-playing game “Lineage II” is succeeding against the top seeds of the online games played in Japan.
Popular Japanese television shows have been finding it difficult to maintain the same level of excitement that they enjoyed for more than three years.
The hit television show “Winter Sonata” earned 50 billion won in Japan during its debut in 2004. However, since then earnings have started to fall.
On the contrary, online games have been on an impressive roll as they continue to grow.
This can be seen from Lineage II’s earnings in Japan. The game raked in 8.4 billion won in 2004, and 24 billion won in 2005. In 2006, earnings went up to 30 billion won and 33.5 billion won in 2007.
As Lineage II released its upgraded “The Chaotic Throne — The Kamael,” in December last year, it enjoyed a simultaneous log on of 57,000 users in January.
In November last year, the Korean game ranked top on the Oricon chart of online games.
Other games that are in service in Japan are also doing well. NHN, which entered the Japanese market in 2000, earned roughly 93.7 billion won as of last year.
Nexon’s online role-playing game “Maple Story” has seen sales increase roughly 40 percent every year since it was released in 2003.
Therefore, it is safe to say the three major Korean game companies — Nexon, NCsoft and NHN — are currently expanding their presence in the Japanese game market.
“Each of the three companies are doing well in the Japanese market with their distinctively different games,” said Lee Jae-seong, an executive at NCsoft.
NCsoft’s games are mainly focusing on massive multimedia online role-playing games while Nexon’s games are mostly casual games like “KartRider.”
“Lineage II has the possibility of breaking the three-year barrier and succeeding for an extensive period,” said Lee.