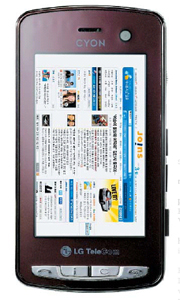 Recently, the number of subscribers to 3G mobile telecommunications reached over 9 million in Korea.
The service allows access to high-speed wireless communication as well as visual communication.
The rising popularity of the 3G service has led to increasing interest in mobile phones with touch screens, which make browsing the Internet easier.
The world’s touch screen phone market is projected to reach 35 million units this year, twice the amount of last year, according to the market research institute Gartner.
Compared to conventional mobile phones, touch screen phones stand out when accessing wireless Internet.
To use the phone, one only needs to tap a finger on the desired menu on the screen.
With a conventional mobile phone, the user has to rely on the keypad.
Earlier, LG Electronics’ mobile phones led the touch screen market in Korea with models such as the Prada or Viewty.
However, the competition recently heightened as Samsung Electronics introduced the Haptic cel last month.
LG Electronics first introduced the Prada phone (SB310) at the end of 2006.Despite its expensive price tag, at 700,000 won ($700), the phone has sold more than 160,000 units.
The Viewty phone (SH210), which was a follow-up to the Prada model, has a high-resolution digital camera.
The phone has sold more than 130,000 units since it was released in December 2007.
As a counter-move, Samsung Electronics brought out the Haptic (W420), the final mobile phone of the company’s Ultra edition series.
The Haptic phone’s touch screen isn’t all the cell has to offer, said Jang Dong-hoon, an executive at Samsung Electronics.
“It allows users to feel the analog sensibility,” said Jang.
By using a finger, a user can turn the digital dial on the screen to turn up the phone’s volume.
Every time the volume increases, the phone vibrates, giving a similar feeling to turning up an actual volume dial.
When searching for pictures, it allows the users to feel as though they are flipping through an actual photo album.
Additionally, it gives the feeling of operating an actual personal computer by dragging the arrow on the screen and tapping on folders, just like you do on a computer. The phone also has a scroll function.
Three thousand units of the Haptic phone are sold every day, according to Samsung Electronics.
LG Electronics is not sitting back with its arms folded. In the same month the Haptic phone was released, LG Electronics introduced its Touch Web phone (LG-LH2300),which is equipped with a 3-inch-wide full touch screen. The resolution is 800 by 480 pixels.
“Other than the size of the words on the screen, everything is almost the same as a personal computer,” said Sang Doo-hwan, an executive at LG Electronics.
“You can surf the Internet as you would with your personal computer and exchange e-mails.”
Previously it was not easy to access the Internet via mobile phones. Users had to go through a series of complicated menus after connecting to the different mobile communication services of the three top telecommunication companies in Korea: SK Telecom, KTF and LG Telecom.
The Touch Web phone has cut down this complicated process, and just five days after the phone was released on the market, it sold over 5,000 units.
The Haptic phone, with a resolution of 432 by 240, is relatively low compared to the competition.
Therefore, when browsing the Internet, it only shows a quarter of the screen that appears on the Touch Web phone’s screen.
However, the Haptic has 22 different vibrations, whereas the Touch Web phone has a full browsing function and a 3-megapixel camera.
The Touch Web is priced at a relatively cheap at 670,000 won.
However, on the mobile telecommunication service, it is hard to compare which is better. While Haptic uses services provided by KTF and SK Telecom, Touch Web is exclusively provided by LG Telecom.
In the first six months of subscription, LG Telecom will charge 6,000 won per month for unlimited access to wireless Internet.
KTF and SK Telecom is offering its wireless Internet service at 25,000 won per month.