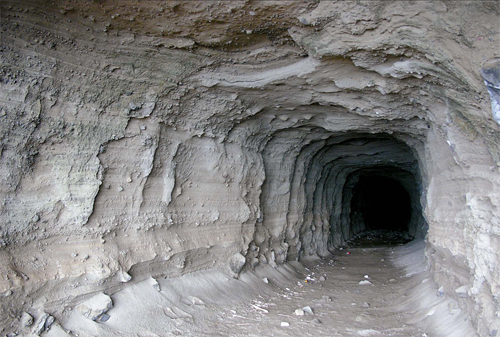 JEJU — Looking for the Alddreu airfield was no easy task. Even the navigator of the rental car was unsure.
I eventually arrived at our destination after asking some locals in Moslepo for directions. But even so, if I hadn’t spotted a small construction sign beside the road, I would have missed the turn.
The only landmark is a closed-down seafood restaurant nearby.
Half a century has passed and now Alddreu is a vast potato field, unrecognizable as the military installation that the Japanese built in the late 1930s during the colonial period (1910 to 1945).
For most Koreans, the word Alddreu has little meaning. It’s Jeju dialect, which Korean speakers find tough to understand, and means “the garden down below,” a probable reference to the flatness of the terrain here.
I got out of the cab and gazed over the scenery. What caught my attention were the small hills that jutted out of the land like green pimples.
Each had an entrance shaped like a thick cross and was large enough for a small plane to fit inside, which had been the purpose once upon a time.
It’s not easy identifying these abandoned hangars from a distance. Clearly the Japanese military took great pains to camouflage the area. 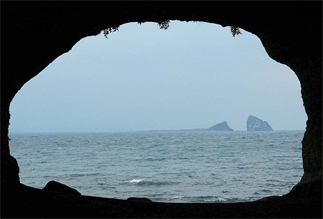 Allied shipping from caves off the southern Jeju coast. By Brian Lee.

From inside, they appear very sturdy despite decades of wear and tear. Grass grew inside and a few cigarette butts littered the ground.
But if you close your eyes, you can picture the airfield and even hear the roar of the engines above the wind blowing off the southern coast of the island.
The hangars are scattered over the field, some adjacent to each other, others standing alone. But there are no official markings, nothing to suggest that this was once an active air strip from which the Japanese launched air raids on mainland China.
Visitors have to search around to fully grasp the location of all the hangars.
Jeju City has recently begun laying down tarmac roads to make it easier to reach the airfield from the roads that skirt around. The aim is to draw in tourists. The Cultural Heritage Administration designated the airfield a heritage site last year as part of a broader effort to preserve sites in the country linked to its modern history and the Japanese colonial era.
Seogwipo City is planning to develop the area into a major theme park, which will include a museum. The main construction is scheduled to start in 2009 and last through 2015.
Kim Seong-hun, an official in the city government, said the total budget for the project would be around 59.1 billion won ($58.6 million).
“The land belongs to the Defense Ministry since it was a military installation. Now it has been leased to citizens,” says the official. “We have to negotiate the sale of the land or a lease.”
The airfield served as a transoceanic bombing base during the war between China and Japan in 1937. The planes ran bombing missions over Shanghai, Nanjing and other cities in the East Asian theater. 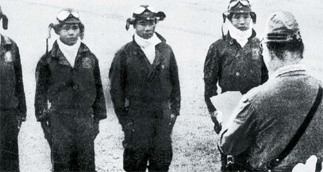 The strip was expanded until 1943 when 19 hangars dotted the landscape. At its height, 2,500 Japanese soldiers and numerous fighter planes were based here. The Japanese Imperial Navy unofficially called the fighter planes akatombo, which means red dragonfly.
The Japanese military picked the area because it was the largest open field on Jeju. Thousands of Jeju citizens were forced to build the landing strip, which is no longer visible, and flatten the land to make landing and takeoff safer.
Apart from the airfield there are other signs that hint at the military value the Japanese placed on Jeju during their occupation of Korea.
Located on the Songak seashore, facing southwest, there are 16 caves cut into the grey cliffs. These were launching bases for special mini submarines designed to sink larger ships on what were essentially suicide missions.
Established by the 201 Japanese Imperial Jinhae Naval Unit, these caves were meant to be a final place of resistance as the Japanese began to sense the war was lost.
Historians say the Japanese military wanted to use these launch sites to prepare for what were considered to be imminent Allied landings on the Japanese mainland.
The mini subs operated in much the same way as aerial kamikaze suicide missions in which Japanese pilots flew their planes into enemy battleships. This was a last ditch effort to thwart the Allies before the eventual disintegration of the Japanese empire near the end of World War II.
The day I visited the caves, a group of Japanese tourists were in sight, but it was not clear what drew them to the spot. Was it the historical value of the place? Or the fact that “Damo,” an MBC-TV series aired in 2003, had been a hit in Japan?
One of the caves was used to shoot a scene with the lead actress Ha Ji-won.
It’s not easy to walk along this stretch of coastline. You have to climb over sharp rocks and avoid slipping. There are dead turtles and fish washed to shore by the incoming tide and garbage that probably comes from passing fishing vessels. 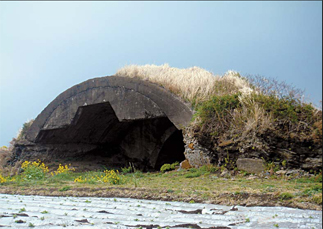 It’s possible to see most of the inside of the caves during daylight hours, but you’ll need a flashlight if you want to venture into their depths.
Scholars say that right before the capitulation of Japan in August 1945, more than 70,000 Japanese soldiers gathered on Jeju Island in anticipation of a final showdown with Allied forces.
The Japanese military command thought the Allies would start their final push to Japan from Jeju. The island’s estimated population at the time was 220,000, underlining the strategic importance Japan had put on Jeju at the time.
The Alddreu airfield and caves for the submarines are a reminder that the people living on Jeju at that time could have been caught in a bloody and prolonged battle in 1945.
Arguably, had it not been for the atomic bombs that prompted Japan’s surrender, Jeju could have been another Iwo Jima.
There are hundreds of unexplored caves scattered around the island, according to scholars, plus underground tunnels and facilities unsurpassed even by those on the Japanese mainland.
Alddreu could become a museum in the future and the bleak landscape that exists there now will disappear forever, reclaimed by the land that Japan took from Korea, but which has since returned to the people of Jeju. So if you get the chance to visit Jeju, make time to see a part of Korea’s living history.
But like I said, it’s not an easy place to find, which must have been what the Japanese had in mind when they built it.