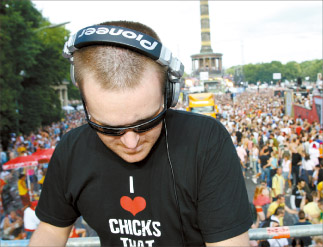 Ricky Stone is one of the celebrated D.J.s to perform at Seoul World D.J. Festival. Provided by the organizer

This weekend, the public park that runs along the Han River in Seoul will turn into a massive outdoor dance floor featuring the who’s who of the world’s most renowned D.J.s and electronica musicians.
This year’s Seoul World D.J. Festival kicks off on Saturday, May 3 in the Nanji Camping Ground of the Han River Citizens’ Park. A whirlwind of activities ranging from D.J. spin-offs to the debut of hot new talents will rock the city until Monday, May 5, a national holiday to mark Children’s Day.
It will be a great opportunity for dance music fanatics in Korea to immerse themselves in the beats created by must-see D.J.s from around the globe. The lineup includes D.J. Dan and electronic group Rabbit in the Moon from the United States, veteran D.J. Ricky Stone and drum-and-bass scene staple Marcus Intalex from the United Kingdom, and Japanese electronic music pioneer Cornelius, just to name a few.
Korean D.J.s such as House Rulez and Oriental Funk Stew will also get behind the decks at the festival. Oriental Funk Stew, a world-class house artist, started spinning house music in the United States 15 years ago. He is now a regular at the international dance music festival.
“Korea joined in the club music scene relatively late compared to the United States, Europe and Japan. But it’s experienced incredible growth in a short period of time. We D.J.s say the country has put itself on the world D.J. map,” said Oriental Funk Stew. “I’m very excited. With further fostering of house music artists and labels, there’s a lot of potential here.”
It was exactly that kind of sentiment that made the organizers develop the Seoul World D.J. Festival into an independent event. It originally began as a part of the Hi Seoul Festival last year and, to the surprise of many, drew 90,000 people. More than 50 percent of the participants were from abroad.
“Events like this can be a springboard for house culture to reach out to the Korean public,” said Choi Seong-cheol, one of the organizers. “We are also very hopeful about Korea’s chances of becoming Asia’s ‘it’ place for house music, since not many Asian countries have an annual D.J. festival like this.”