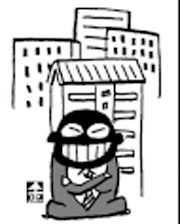 Western societies, it seems, did not look kindly on the rich. Bible verses affirm this: “How hard it is for the rich to enter the kingdom of God! Indeed, it is easier for a camel to go through the eye of a needle than for a rich man to enter the kingdom of God.”
However, in the modern era, the perception has changed. Representative of the new perception is sociologist Max Weber’s “The Protestant Ethic and the Spirit of Capitalism.” A believer’s duty is to work diligently and save the profits. Following this, wealth quickly accumulates. Modern capitalism is not based on an ethics-free personal profit-seeking mentality, but is based on strictly taking responsibility for one’s livelihood as a religious duty. Weber’s dissertation was an ethical blessing to those who accumulated wealth. Blessings from academia combined with religion provided the underpinnings for the rise of the rich in respectability in the West. They may have even earned the right to go to heaven.
However, in South Korea, the rich are not respected. The Lee Myung-bak administration’s popularity was heavily damaged when news broke that his cabinet and senior aides were mostly Gangnam real estate-rich. What drove out three cabinet nominees and a chief secretary were mainly accusations of real estate speculation. This is a strange phenomenon, given that speculation is itself not a crime. According to economic theories, speculation has the positive effect of stabilizing the market by blocking drastic price fluctuations. Further, by definition, speculation is a short-term investment with a high risk of losing money, and high potential for profit, if successful. According to this view, the problematic real estate holdings were not speculative. The owners were not after short-term profit, having held them for several years.
Investment would be a better description. However, if people buy real estate to accumulate wealth, they are seen as speculators. Of course, faking registration documents to acquire the right to purchase farms is a violation of national law, though it is subject only to an administrative penalty of a fine; it is not a crime.
Nonetheless, when we find out a public servant rich in real estate has faked his registration address, we question his morality. Still, we don’t apply the same ethical standards to drunk driving, which is more harmful.
In the end, antagonism toward the rich lies at the core of criticism. A verse in Jeong Yak-yong’s poem, “With a Drink on a Summer Day,” is the talk of the town. “Only they become prime ministers/ only they become ministers and inspectors/ only they become high government officials and auditors.” The administration, not the rich, should respond to this.

The writer is a JoongAng Ilbo editorial writer.