Canoeing and canoodling by the waterfront

Canoeing and canoodling by the waterfront 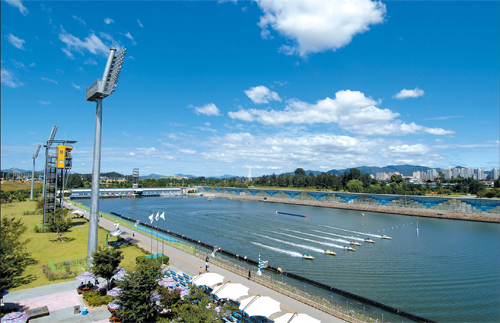 Speedboats streak across the course of the Motorboat Racing Association complex in Misari. [JoongAng Ilbo]

What a difference weather makes.
My first visit to Misari was on an abnormally cold Saturday for the season, drizzly and gray. When I got to the park, its biggest attraction, the Motorboat Racing Association complex, appeared closed for the day.
The still surface of the huge aquatic race course reflected only the dismal, sooty color of the sky. As I toured the park, the only people I saw were some scowling children who pedaled past on bicycles.
Skip forward four days later. About 10 degrees Fahrenheit (4 degrees Celsius) warmer and with a healthy helping of sunshine, Misari was a far more pleasant sight — or site.
From my bus on the main road that runs along the park, I could see motorboats’ wakes streak across the gigantic pool of water, now cobalt blue. As I walked down toward the Motorboat Racing Association complex, the parking lot — largely vacant on that grim Saturday — was now full of private vehicles and tour buses. Ajeossi crowds — and the occasional unlucky ajumma — filling the stands added their brays to the roar of the boats’ motors.
So there is, in fact, a reason to come all the way out here, I realized.
The neighborhood of Misari, located in the city of Hanam, Gyeonggi, east of Seoul, is not a pretty place. While it’s known as a popular hangout for those entangled in extramarital affairs — one kindly security guard was surprised to find I was there by myself — or the last stomping grounds of washed-up musicians, it’s the racing that draws the masses.
Perhaps park authorities knew what they were doing when they decked the grounds with banners reading “Spring and motorboat racing.”
Getting to Misari is a long affair. From Seoul, it’s at least a bumpy 40-minute bus ride along dusty roads bordered by depressing junk yards and stores selling tires and lobster tanks. The road that leads to Misari is an uninteresting highway on which taxi cabs are a rare sight — so don’t find yourself caught without a ride in this part of town.
Just outside the northern end of the course along Misari-gil is a collection of “music cafes,” which are more like soju tents and open-air galbi joints than their charming name suggests. By day, they’re sparsely patronized and there doesn’t appear to be any live music to be found, although by night they’re apparently the venue of last resort for performers who just can’t give up the limelight.
The park itself is a vast complex of verdure in the middle of nowhere, appropriate as the setting of the 1988 Seoul Olympics water sports events. Likewise, for the 1996 Atlanta Games, Olympic athletes raced on Lake Lanier outside the host city in the boondocks of Gainesville, Georgia. While the raucous motorboat race course is the place for excitement within Misari, it only comprises 600 meters of the entire 2,000 meter pool.
Other areas don’t exactly see many visitors. Many of the snack stands and vending machines were closed, but that did mean there was plenty of green space for families and small groups to lounge and picnic.
As you near the far southern end of the course, where the non-motorized boats reign, you’ll start to see the odd kayak or two, then more will paddle into view. Before long, you’ll start to hear the characteristic clunk-clunk of rowing oars turning in their oarlocks and the megaphone-amplified commands of coaches shouting their directions.
While the traffic on this end of the water never reaches the volume of that on say, the Potomac in Washington, D.C. or the Charles in Boston, that’s most likely a boon for the athletes here. On the docks, a squad of some 20 boys from Deokso Middle School practiced following their coach’s commands in a dragon boat, and in the bays of the boathouse were more teams preparing for practice.
While no one spoke English among the teams — the rowers and kayakers from Seoul Physical Education High School and Korea National Sport University — the athletes and their coaches were eager to offer assistance. Unfortunately, as they reported, access to the kayaking and rowing equipment is closed to the public, although canoe rentals are available.
The eastern side of the course was even more sparsely populated; perhaps this is where the illicit lovers picnic.
With its paucity of English-language resources, Misari won’t become a hotspot for foreigners anytime soon. The park is, however, aiming to attract visitors. Throughout May, Misari will host events such as the “Dance Festival of University.”
For those Seoulites looking to invest some time in a picturesque, quiet getaway from the city, Misari can make an entertaining trip — especially for some people-watching at the motorboat races.
Just make sure to wear your walking shoes and, of course, check the weather.

Misari is accessible from Jamsil Station, line No. 2, exit 7, or Myeongil Station, line No. 5, exit 4. From Jamsil, take the jungle green-and-white colored GBus No. 16. From Jamsil, the bus takes just over an hour. From exit 4 of Myeongil Station, cross the street, make a left and walk to the bus stop and catch the same No. 16 bus.
For information on races, visit www.motorboat-race.or.kr. Admission to the Motorboat Racing Association complex is 400 won ($0.40). To rent a canoe free of charge, call Seoul City Canoe Rentals at (02) 490-2915, which is a Korean-only number.


Dance Festival of University
To May 25: Fifteen dance teams from 10 Korean universities will show off their dance moves from traditional Korean, contemporary and ballet varieties and battle for top honors. Performances take place at 4 p.m. on May 5, 11, 18 and 25 at the Children’s Day Special Stage.

Air-bounce Children’s Playground
May 4 and 5: Misari becomes a playground full of colors and shapes where children aged 3 to 10 can let their imagination run wild. The playground will be available from 11 a.m. to 4 p.m. on the first floor of the Spectators’ Building and outdoor area. First come, first served.

Art Classes
May 4 and 5: Kids from age 6 to 12 can try their hand at pottery, soap-making, beading, face painting and woodworking from 11 a.m. to 4 p.m. on the second floor of the Spectators Building. First come, first served.

Experiencing Water Sports
May 5: Kayaks, rafts and banana boats are available for public use from 11 to noon and from 1 to 4 p.m. at the Motorboat Racing Course. First come, first served.