Lantern Festival lights up streets of Seoul for Buddha’s Birthday

Lantern Festival lights up streets of Seoul for Buddha’s Birthday 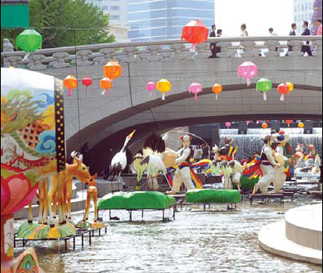 The streets of Jongno in central Seoul turn into a sea of fire every year on the eighth day of the fourth month of the lunar calendar as throngs of people join the Lotus Lantern Festival.
Colorful paper lanterns in hand, they celebrate Buddha’s Birthday, a national holiday, which falls on May 12 this year. The parade begins this Sunday, May 4, at 8 p.m. at Dongdaemun Soccer Stadium and ends at Jogye Temple in central Seoul.
A variety of Buddhist festivities will take place before and after the parade, including classes on printing Buddhist sutras using wooden blocks and martial arts performances and dance. In the Jogye Temple courtyard, Buddhist chefs will offer temple food.
At 1:20 p.m this Sunday, organizers will hold a special class for expats in front of Jogye Temple on how to make paper lanterns.
Each Buddhist lantern contains a wishful message: A crane stands for spiritual elegance; a wooden fish stands for diligence of spiritual practice; a bell is supposed to control people in hell; and a watermelon stands for fertility.
The parade is also an occasion to bring together Buddhists from Tibet, Thailand, Taiwan and Burma.
An exhibition of traditional lanterns will be on display through May12 at Bongeun Temple near COEX in Samseong-dong, southern Seoul. In addition, there is a paper lantern display along Cheonggye Stream in central Seoul through May 12.

Expats need to register for the lotus lantern class at www.llf.or.kr. The class takes place in front of U-Jeong Gook in Jogye Temple Street. To get to Jogye Temple, go to Anguk Station, line No. 3, exit 6. Walk about five minutes. For more information call (02) 722-2206.