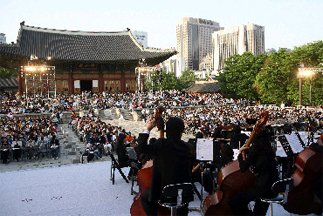 An open-air concert at Deoksu Palace during the Hi Seoul Festival last May. Provided by the organizers

Prepare yourself a traditional royal costume, because from tomorrow you can become a member of the royal family from the Joseon Dynasty.
Five grand palaces in central Seoul will be packed with outdoor festivals and programs as part of this spring’s Hi Seoul Festival.
The historical musical “The Last Empress” and other outdoor concerts will be staged at Gyeongbok, Changgyeong, Deoksu, Changdeok and Gyeonghui palaces.
“We wanted to break away from the austere image of traditional palaces,” said Ahn Ho-sang, the president of the Seoul Foundation for Arts and Culture.
Instead, the palaces will be made to look more festive and will provide the backdrop for the events.
“A palace is a rich source of events and stories from Korea’s 5,000 year history,” Ahn said. “It [palace] is a key word that represents how tradition and history intersect.”
Ordinarily, the Seoul city government strictly forbids commercial or private performances inside a palace. But it has made an exception this year, according to Park Chong-hwan, an official from Arts Communication, the production company staging The Last Empress.
The palace festival kicks off with the coronation of King Sejong the Great (1397-1450) at Gyeongbok Palace, tomorrow at 4:30 p.m. King Sejong created Hangul, the Korean alphabet used today.
The re-enactment of Sejong’s enthronement takes place inside Geunjeongjeon, which used to be the Office of State Affairs in Gyeongbok Palace.
Deoksu Palace will play host to a jazz, rock and Latin fusion concert as well as a traditional and modern art fair at Seokjojeon Hall.
The show, called “Media Art Awakening the Tradition,” is a display of media technology arts and traditional paintings and music.
For a thorough tour of a Joseon Dynasty palace, visit Changgyeong Palace. The tour highlights the palace’s architecture, nature and culture.
At Changdeok Palace, there will be demonstrations of traditional music and dance like cheonnyonmanse, a special composition mixing chong-ak, traditional formal music, with minsok-ak, or folk music.
Famous pansori singer and intangible cultural asset Ahn Sook-seon will sing “Shimcheongga,” a traditional folk story about a blind father and his daughter. Pansori is a genre of Korean vocal music.

One of the visual highlights will be the historical epic The Last Empress, which was first staged in 1995 and stars Lee Tae-won and Lee Sang-eun. It portrays the ill-fated life of Queen Min (1851-1895), King Gojong’s wife and the last empress of the Joseon Dynasty.
This staging at Gyeonghui Palace emphasizes the traditional settings and culture, including scenes depicting the military service examination and shaman rituals.
“The palace is an ideal venue to capture the dramatic tension of the musical, which is based on historical facts that took place more than 100 years ago,” Park said.
Instead of acting on a stage, as in most musicals, the actors perform close to the audience using the palace as scenery. Min and Gojong are seen walking around the palace buildings with their courtiers standing beside the stone walls.
Props including cannons will be planted near the seated audience, adding to the drama, and when Min is assassinated, the court ladies dash from the actual anchae, the inner building where their real counterparts lived.
“Each of the musical characters is a living soul expressing history,” Park said. “The use of artificial lighting and technology will be minimal to make the best use of the palace’s natural lighting.”

For more information about his year’s Hi Seoul Festival, call (02) 774-4237 or visit www.hiseoulfest.org.