The footprint of food

The footprint of food 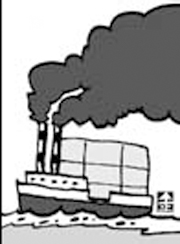 The rate of conversion of rainforests to farmland and pastures, which once remained stable at 7 percent 300 years ago, has seen a remarkable increase to more than 40 percent in recent years. With over 40 percent of the Earth’s rainforests already destroyed, the capacity for absorbing greenhouse gases is decreasing.
The transport of foods over hundreds or thousands of kilometers also poses a significant threat to the environment by the amount of greenhouse gases emitted in shipping.
Korean pears are shipped to the United States, and Chinese pear juice is imported to Korea.
Cod caught off Norway is shipped to China to be turned into fillets, and then shipped back to Norway for sale. It costs only $0.50 in China, much cheaper than $2.99 per kilogram in Europe.
In this process, there are no binding regulations on greenhouse gas emissions. Under the 1944 Convention on International Civil Aviation, commonly known as the Chicago Convention, there is no simple way to impose levies on fuel consumed in carrying commercial cargo on various international routes by air or by ship. (The bulk of air freight for example, comes in the belly of passenger airliners.)
Environmentalists are insisting that governments should take regulative measures by imposing relevant taxes on fuels or preventing emission of greenhouse gases.
The European Union plans that all cargo-carrying commercial aircraft coming to and from Europe be required to purchase the right to emit greenhouse gases.
Some people are also insisting that consumers should have the final say, rather than regulations. One way is to indicate each product’s “greenhouse footprint” on its label showing the total amount of greenhouse gases emitted in the process of producing and transporting the product.
Currently, people are initiating local food movements in many places as collaborative efforts to build more locally based, self-reliant food economies. It is gaining widespread popularity among consumers. For example, the “100 Mile Diet” movement in New York is spreading rapidly. People only buy foods produced within 100 miles from their home, at least during harvest season.
Led by the local government of Wanju County in South Jeolla Province, the Korean government is also pushing ahead with measures to provide schools and welfare facilities with environmentally friendly agricultural and processed products produced in local areas. However, it is inevitable that food transportation will see a more rapid increase, and consumers will be more concerned about availability of a lower-priced and varied range of imported foods.