Time stands still for a master of soy bean paste

Time stands still for a master of soy bean paste 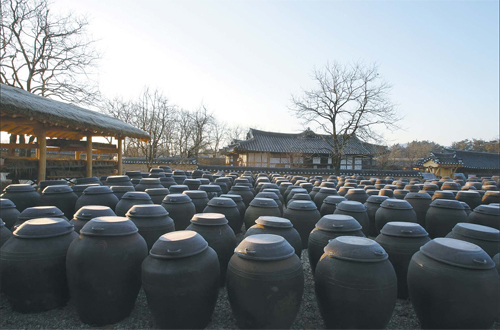 
BOEUN, North Chungcheong — Every spring Kim Jeong-ok’s backyard fills with the pungent aroma of fermented soybeans as she gets ready to make doenjang, soybean paste.
The tradition of making this paste has a long history in her husband’s family, going back over 300 years.
Making the paste is a job every woman in her position is obligated to undertake.
But Kim is not complaining: She is considered an expert in this culinary field and her home-made brand “Adanggol” is popular among housewives today.
As the wife of the 21st head of the Seon family clan of Boseong, Kim occupies a prestigious position. She lives in the clan’s ancestral home, an elaborately designed hanok, a traditional Korean home.
The home, which the government has designated a cultural asset, contains 99 kan, or rooms.
Since Kim married into the Boseong Seons, she’s been inundated with work around the house.
On a typical day, she cooks 12 dishes for which she has to prepare different sauces.
“[Making the sauces] is an annual ritual in this family,” Kim says. “A farmer’s wife says early winter is a relaxing time because the yearly harvest is over. But for the wife of a clan head, the work never stops. Once I am done with making kimchi, I have to start planning to make different sauces, including soy sauce, chili paste and soybean paste.”
Soybean paste is a quintessential example of slow food in Korean cuisine. It takes 3 to 12 months to make and it’s very good for your health.
Kim’s pastes in particular are known for their deep taste and people are prepared to spend big bucks on her products.
At a food auction in a local department store here in 2006, a one liter bottle of Kim’s vintage soybean sauce was sold for 5 million won ($5,000).
The sauce was 350 years old and had been inherited by her mother in-law.
Kim uses the sauce sparingly, only on special family occasions or to strengthen newly-made soy sauce.
The sale of the vintage sauce attracted a great deal of publicity and Kim felt confident enough to start a business for homemade soy sauce.
She called the product Adanggol, which means a “valley with a beautiful house,” a reference to the area where the Boseong Seon’s clan house is located.
The natural surroundings at Kim’s house make the place an ideal site for organic food. The house is located near a pine forest and a stream, which runs down from Mount Sokri. 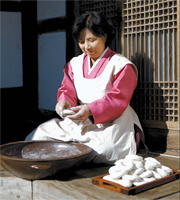 In the early morning, Kim takes the lids off her pots to allow pollen from the pine trees to mix with the soybeans.
The area is rich in history and is filled with the spirits of her family’s ancestors, she says.
There’s an old story that tells how members of her clan saved the lives of a group of villagers from Boeun County during the Korean War (1950-1953). Some North Korean soldiers were about to execute the villagers when some of her relatives intervened and persuaded the authorities to spare their lives.
Kim says the secret to her family’s recipe is the ability to identify healthy beans and knead the bean batter properly.
“Using local beans is a must,” she says. “They’re harder to find and more expensive, but you can tell the difference from the color. [Local beans] are more vivid and rounder.”
The beans, which are usually kneaded before autumn, are boiled until soft. They are pounded in a mortar, shaped into flat square cakes and dried for over 30 days on a bed of straw.
They are then placed on a floor heated to 42 degrees Celsius (107,6 Fahrenheit) and sun-dried again for over a week.
After a few more weeks of drying, yellow mould starts to form on the soybeans. A good meju, or soybean malt, has a balanced mix of white and yellowish mould.
When making soybean paste, experts say it’s best to keep the amount of salt to 18 percent. You soak the malt in salted water to initiate the fermentation process. After about 40 days, you separate the malt from the salted water, which Kim then uses as the basis of her soy sauce.

Top to bottom: Malted soybean cakes wrapped in straw and hung from the ceiling to dry for a few months; pots for chili paste; a bowl of fresh soy sauce. [JoongAng Ilbo]

Kim puts her soybean sauces to good use in the house, mixing them with crushed dates and adding them to steamed rice, which is considered a local delicacy. She adds soy sauce to noodle soups and seasons her spring vegetables with soybean paste.
Soybeans are well known for their health benefits, Kim says. If someone has a stomachache, she prescribes a spoonful of soybean paste in boiling water. Soybean paste is proven to enhance digestion, Kim says.
In addition, beans are 40 percent protein, and as they ferment and disintegrate, they form amino acids, which many doctors say helps prevent cancer.
Kim married when she was 24. “My grandmother used to say that food is all about love,” she says. “I think I know what that means now. Sometimes sauces I make on the same day can vary in quality: some are good and some are bad. The difference is care and love. Making food requires the same amount of effort as raising a child.”

Her house is also available as a guesthouse. Students and housewives from across the country come here to learn about traditional Korean food.
Out of all her guests, though, one person stays in her mind the most, a gentleman who visited the house in 1998 when a massive flood hit the town and left most houses waterlogged.
“He came with his children and fed us with a whole basket of bread,” she says. “They cleaned up all the rooms in the house and then returned home. I want to treat him and his family to a nice meal when I see him again.”
The authors of an old book about kitchens says an earthenware pot needs to be rinsed with cold water twice a day, because a dirty pot will rot the sauce inside. The book also says that leftover water in the pot needs to be soaked up with a dry cloth to deter bugs.
Kim starts her day washing 200 pots. In the old days, people used to put charcoal and red pepper in the pot, because they believed it helped sterilize the sauce.
“My mother-in-law was not superstitious, but she always followed this rule,” Kim says. “She believed in the wisdom of her ancestors.”