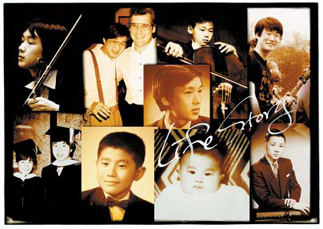 The 12-day festival showcases a range of chamber music. Provided by the organizer

It’s a perfect opportunity to treat your ears to some world-class chamber music.
You don’t have to travel far. Nor do you have to spend as much as you might expect in order to glimpse these artists.
The Seoul Spring Festival of Chamber Music began only two years ago, but it has already grown to attract a number of A-list classical musicians from around the world.
This year’s lineup includes festival art director and violinist Kang Dong-suk, violinist Pinchas Zukerman, the Prazak Quartet and the French Clarinet Ensemble “Les Bons Becs.”
The festival opened last Friday with the première of a new work by the composer Kang Unsu at Sejong Chamber Hall, in line with the festival’s attempts to discover and encourage rising young musical talent.
The festival’s organizing committee has designated Kang as this year’s composer. His work “Forever Young” is inspired by an encounter between Yun Dong-ju, one of Korea’s most loved poets, and Pastor Kang Won-yong, the composer’s uncle. 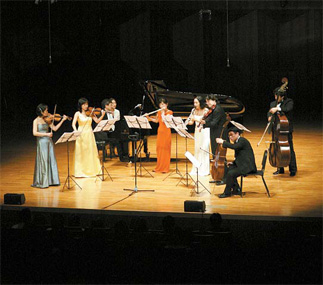 The 12-day festival under the theme “Life Story” showcases a range of chamber music divided into six areas of life.
“Youth” features energetic compositions written by artists in their early years. “Twilight” presents pieces composed in the later years of the artist’s life. “Love and Passion” is for music inspired by the most universal theme, love.
Pieces with the motif of death will be found in “Love and Death.” “Enchantment” offers happy tunes while “Tutti Frutti” contains beautiful harmonies created by musicians from all over the world.
Concerts will take place at various spots at different times of the day. The hope is to reach out to the Korean public instead of just waiting for people to fill the auditoriums.
“We understand that chamber music can feel distant to the masses,” said Kang. “So this year we are mainly focused on taking chamber music closer to the Korean public. We’ve made the repertoire more diverse, friendly and fun, without sacrificing the quality of the music.”
Kang, who gave his first solo concert at the age of 8, has shown a strong passion for chamber music, participating in a number of world chamber music festivals.
He’s been the artistic director of the festival since 2006. He also teaches in the music department at Yonsei University and works as the art director at “MusicAlp,” a summer music camp in Courchevel, France.
Performances by Richard Hyung-ki Joo and Aleksey Igudesman are just some examples of people-friendly classical music during the festival. The duo combines classical music with humor. Their unconventional show has been well received in the United Kingdom, France and other parts of Europe. 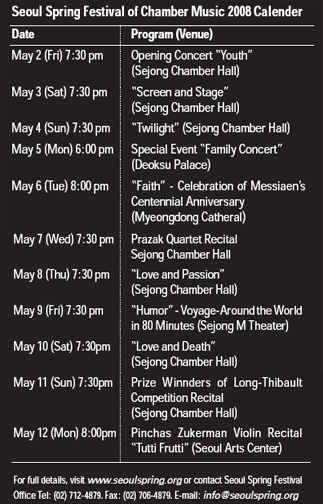 Chamber music will also be taken to a place it’s rarely been — one of Korea’s royal palaces.
Performers including Kang, Chilean violinist Andres Diaz and French pianist Dominique Merlet will play Beethoven, Popper and Tchaikovsky at Deoksu Palace in central Seoul this evening.
One of the highlights of the festival will be tomorrow’s concert at Myeongdong Cathedral in downtown Seoul.
The concert will celebrate the centennial of the birth of Olivier Messiaen (1908-1992), a French composer, organist and professor of music.
Regarded as one of the most influential composers of the twentieth century, Messiaen often depicts Roman Catholic theological subjects in his music.
Pinchas Zukerman, an Israeli violinist recognized as a musical phenomenon for nearly four decades will perform with his wife, the cellist Amanda Forsyth, and Russian pianist Tatiana Goncharova on Monday, May 12 at LG Arts Center in southern Seoul.
In July, the festival will make an ambitious debut in the global arena with concerts in Beijing and Shanghai.
“We will introduce the festival to a different country every year. We have high hopes for the future,” said Shin Dong-yeop, a business professor at Yonsei and co-director of the festival.