Tenor triumphs against the odds

Tenor triumphs against the odds 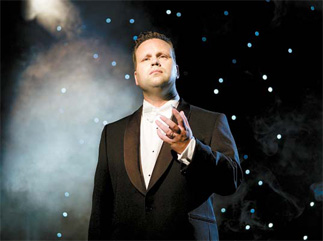 Talent show winner Paul Potts has overcome bullying, illness and debt to sell over 3 million albums. Provided by the organizer

“If you can meet with Triumph and Disaster/ And treat those two impostors just the same/ ... Yours is the Earth and everything that’s in it/ And — which is more — you’ll be a Man, my son!”
Paul Potts, 37, the mobile phone salesman-cum-global opera star, picked these words from Rudyard Kipling’s poem “If” as his favorite quotation.
Potts’ own version of “triumph and disaster” has been a huge inspiration to millions throughout the world.
In June last year, the short, overweight, gap-toothed amateur won the contest “Britain’s Got Talent.”
His rendition of Puccini’s “Nessun Dorma” blew away the judges, the competition and audiences around the world.
In interviews, Potts has talked about how he was bullied and teased at school because of the way he looked.
From 2003 he battled a spate of health problems: appendicitis, a tumor and a shattered collarbone. He couldn’t work and got into debt. To top it all, he was told he might not sing again after his collarbone surgery.
This week Potts is in Korea for three concerts in Seoul, which began on Saturday. He will sing in Busan on Wednesday.
Last July Potts released his debut album, appropriately titled “One Chance.”
It has sold over 3 million copies worldwide, earning multiple gold and platinum records. Since January he has been on a world tour to promote the album.
“Potts has a voice that moves people, which is every singer’s dream,” said soprano Kim Eun-kyeong, who performs with Potts on his Korea tour.
“I am so honored and grateful to be able to be on stage with him,” she added.
Potts’ message of hope will even cross the border into North Korea. He will donate 10 percent of the profits from his Korean tour to organizations working to help North Korean children suffering from tuberculosis.
“If I’d been told a year ago that I’d be doing what I’m doing now, I’d have said, ‘That’s crazy,’” Potts said.
“With my songs, I want to tell people that they should never give up. What’s presented to them at present may look like the last window of chance, but they never know what’s around the corner,” he said.