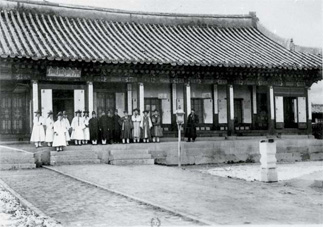 Podocheong, the police bureau during the Joseon Dynasty. [JoongAng Ilbo]

They had it all: undercover investigations, secret codes and arrest warrants.
Podocheong, the police bureau in the Joseon Dynasty, was surprisingly similar to Korea’s law enforcement agency today.
According to the book “Cheonggye Stream is Alive,” Podocheong consisted of a bureau chief, dozens of police officers and about a hundred guards.
They used an interesting array of secret codes and sign languages. When they spotted a criminal, they would shout “fly” if they needed back-up. Once apprehended, the target was handcuffed using rope called ora, which is made of five braided strings, which were like fingers and thumbs.
Because of the frequent use of sign language, there was an old saying that “Three years at Podocheong will make the blind see and the mute speak,” wrote Lee Kyeong-jae in his book.
According to the book, there were female police officers, too.
They were called damo and they could freely search residential areas that men could not enter.
Damo actually refers to a servant responsible for serving tea, a job which offers undercover detectives an interesting surveillance opportunity.
Confucian values at that time strictly separated the roles and public communication between men and women. 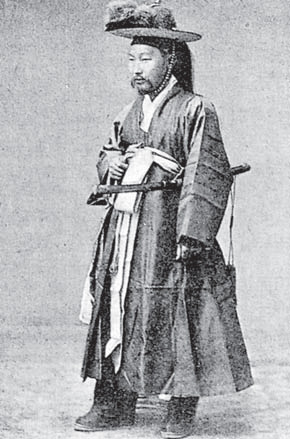 A police bureau chief during the Joseon Dynasty. [JoongAng Ilbo]

In order to become a police officer, a woman needed to be more than 152 centimeters (5 feet) tall, able to lift a bag of rice weighing more than 40 kilograms (88.18 pounds) and capable of downing three bowls of makgeolli, a Korean rice wine.
Several historical records refer to damos playing a major role in solving important cases.
Police officers during the Joseon Dynasty also carried a tongbu, the equivalent of an arrest warrant today. It was a piece of wood with the bureau chief’s seal carved on it.