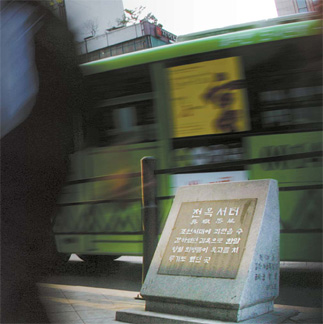 A stone marker indicates the original location of Jeonokseo near the Gwang wamum ost Office in Jongno, central Seoul. By Oh Sang-mina

It was a prison that used to house common criminals. But during the Japanese occupation of Korea (1910-1945), independence fighters were incarcerated there, one of the great injustices of Korea’s colonial past.
The nine-cell prison stood where Gwanghwamun Post Office in Jongno, central Seoul, is located today. It’s hard to imagine, as you look around at the glass-fronted offices, plush boutiques and bustling restaurants, that one of the most feared places in the capital during the Joseon Dynasty (1392 -1910) stood there.
The rulers at that time governed according to a philosophy of controlling the people through virtue and benevolence.
“From the early says of the Joseon Dynasty, Jeonokseo was the central prison [in Seoul]for thieves and robbers,” said Nah Kag-soon, a researcher at the Seoul Metropolitan City History Compilation Committee.
“Jeonokseo was essential for maintaining order in people’s daily lives at that time,” Nah said.
Inevitably, the crime rate in Seoul rose as the city grew in size, but the prison authorities were unable to expand the prison,
The rulers declined requests to expand the facility, fearing that a bigger prison could encourage crime. 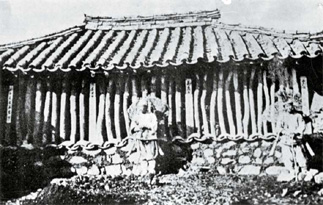 From the early years of the Joseon Dynasty, Jeonokseo was the main prison for riminals. [JoongAng Ilbo]

Just like in prisons today, inmates at Jeonokseo worked and earned money.
According to the book “Chyeonggye Stream is Alive” by Lee Kyeong-jae, they made jipsin, straw shoes, which were hugely popular for their good quality.
Under the supervision of prison guards, inmates were allowed to sell jipsin at markets, generating useful revenue for the prison.
But the years leading up to the Japanese occupation of Korea (1910-1945) radically changed how Jeonokseo functioned in society.
It filled up with people arrested in the struggle for independence, men and women who were regarded as criminals by the Japanese colonizers.
Their so-called crimes were often little more than protesting what they saw as repressive acts, such as the murder of Queen Myeongseong in 1895 and the signing of the Eulsa Treaty in 1905, which made Korea a protectorate of Japan and forced the abdication of King Gojong in 1907.
“The [independence fighters] consisted of people from all social classes and strata, ranging from former government officials and retired soldiers to commoners and peasants,” said Oh Young-seob, a researcher at the Institute of Korean Studies at Yonsei University.

“There were small groups as well as groups of thousands. With their nation’s independence at risk, they devoted themselves to fighting imperialistic policies. They triggered the independence movement after Japan annexed Korea in 1910 and kept the spirit of the movement going for decades,” Oh added.
As part of its scheme to gain full control of judiciary power and the prison system, the Japanese renamed the Jongno prison Gyeongseong Prison in 1907, replacing Korean officials with Japanese.
In 1908 it was rebuilt in Seodaemun near Independence Gate. (It is now a museum within Seodaemun Prison Park.)

The Japanese clearly realized that they would need a larger containment area and the new prison was built to hold more inmates.
By 1908, around 2,000 people were imprisoned in the eight prisons the Japanese ran in Korea, according to Han Hong-gu.
There were 500 in Gyeongseong Prison alone.
The following year, the number of prisoners tripled to 6,000, then grew to 11,000 in 1918 and finally to 15,000 in 1919 when the March 1st Movement took place.
This was the day 33 Korean nationalists signed and read the Korean Declaration of Independence, spearheading the independence movement.
Gyeongseong Prison took over the role as Seoul’s main prison facility for the next 80 years.

During the Japanese colonial rule, it was where many independence fighters were imprisoned or executed.
Its name was changed several times, perhaps reflecting the changing times and shifting political landscape.
Seodaemun Prison, Seoul Prison and the Seoul Detention Center were just three of the names used.