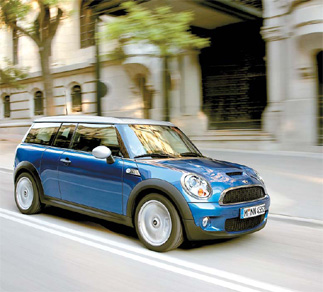 If you enjoy being the center of attention on every street corner, the following two cars might be a perfect match for you.
The hot red-colored new Sebring Convertible and the brown Mini Cooper Clubman are so eye-catching that this reporter felt like hiding under her seat during the test drive just to escape the attention.
Of course, clashing bumpers with startled ajeossi drivers in the next lane is not a pleasant experience.
The two vehicles represent widely contrasting styles.
The new Sebring Convertible from Chrysler grabs your attention with its color and a retro style reminiscent of the 1970s, while the Mini Cooper subcompact, according to BMW Korea, embodies a kind of post-modernism that reinterprets its classic forerunner, which was born almost five decades ago. BMW Group owns the Mini brand.
The 2.7-liter new Sebring convertible, released here in early March, was the best-selling convertible in Korea in 2002 and 2003, when it was much harder to come across Mercedes-Benz and Lexus on the roads.
The revamped model shares many traits with its sedan siblings — an egg-crate grille and a uniquely sculptured hood, both of which feature the brand’s signature look.
Following the revamping process, the vehicle’s soft top has been replaced by a retractable metal hard top that operates at the push of a button. The transformation works only when the car is standing still. The whole process takes 30 seconds.
It doesn’t take much force to get the American car to accelerate. Thanks to the 186-horsepower engine, the vehicle took off with a squeeze of the pedal without any of the delays or retraction you observe in other vehicles noted for their “powerful drive.”
However, there was one downside to the test drive. Normally, vehicles rented to reporters for review undergo a strict checkup. Maybe Daimler-Chrysler Korea had some bad luck for the three days in April when this reporter test-drove the Sebring Convertible.
Less than an hour after the car was handed over for the test ride, the car unexpectedly stalled in front of a crossing next to Shinsegae Department Store in central Seoul. The dashboard flashed in green letters “Oil change required.” Cars behind were honking as the traffic light turned green, but the car wouldn’t budge. 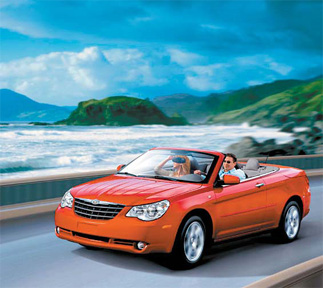 The new Sebring Convertible from Chrysler. Provided by the company

This reporter shifted from neutral into park, but it made no difference. I had no choice but to turn off the engine and restart the car. Fortunately, I got the car moving, but there was more hassle to come.
On April 20, the last day of the test drive, I couldn’t get the car started. It was around 9:30 p.m., but Daimler-Chrysler Korea’s 24-hour service call center said it could not contact any mechanics, but I had to wait 20 minutes to learn that information. Finally, a tow truck was dispatched.
A spokesman for the company later told me that the car spent half a day in the garage for an inspection, but the mechanics couldn’t identify any mechanical problems.
Other reporters are test-driving the same car, he said, but they hadn’t experienced the same problem.
Meanwhile, the 1.6 liter Mini Cooper Clubman, although armed with a cutting-edge six-gear transmission, a twin-scroll turbocharger and a handful of safety features that live up to the brand’s reputation, looks like a cute toy at first glance.
The interior is filled with fun circle- themed elements. The circular speedometer is set in the center of the dashboard, and the climate and audio controls, also circular, are stylishly arranged, with black-and-white cross stripes adding spice to the layout.
It is a five-door version of the popular Mini Cooper, its predecessor, and it features a split-door design that improves access for loading cargo.
The handling response was athletic and agile, and although some say the ride is overly stiff, target drivers — trendy 20-somethings — might be ready to acknowledge the trait as “fun.”
The new Sebring Convertible is priced at 40.9 million won ($40,511) and the Mini Cooper Clubman costs 36 million won.