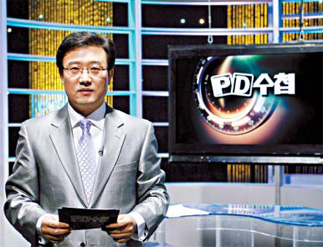 Last Saturday in downtown Seoul, I confronted the power of Korean television. I found myself stuck in the middle of Gwanghwamun surrounded by teenage girls in school uniforms. The minipicketers were holding signs that proclaimed in scary-red letters: “We are here for our survival.”
They were protesting against the government’s decision to resume imports of U.S. beef. Scenes of protests have become almost an everyday sight, but what caught my eye was the presence of these grim-looking teenage schoolgirls.
One girl said, “Hey, tell me again, why are we here?” A girl with glasses gave her a withering look and said, “God, didn’t you watch the ‘Producer’s Diary’ last week? Mad cow disease from America will kill us all.”
The girl in braids paused and then said, “Why would the government harm its own people?” The girl in glasses answered, “Well, just watch that show again, O.K., if you don’t want to be an unpatriotic and ignorant citizen.”
Well, I don’t terribly mind being labeled unpatriotic and ignorant, but I had this strong urge to find out how that investigative news program lured these teenagers onto the street on their precious Saturday evening.
So I scrapped my plan to review an all-entertainment variety show and replayed the “Producer’s Diary,” airing every Tuesday night at 11 on MBC-TV.
The investigative news show has enjoyed longevity in the Korean TV scene with a reputation for battling for justice, although some argue that the show’s pursuits are inclined to be leftist.
Last week’s feature targeting mad cow disease was an “emergency special” with a bellicose title: “Should we risk our lives to eat mad cow meat?” The show opened with a clip that accused an American slaughterhouse of giving electric shocks to downer cows. Then it moved on to emotional coverage of the late Aretha Vinson who is thought to have died of a human form of mad cow disease.
After these emotional interjections, the journalists argued that the United States persuaded the World Organization for Animal Health to change the criteria of mad cow disease in favor of the Americans.
Of course, as professionals, these investigative journalists interviewed civic group activists from Korea and the United States, although they did seem to lean to one side.
However, the highlight of the show was when the journalists quoted recent research from Hallym University that claimed Koreans are genetically more susceptible to the disease.
The show went on to say that people can only be safe by staying away from beef, but added that traces of cow meat can be found in instant noodle powdered soup, cosmetics and drug capsules. These panicky warnings were the major reason these teenagers had hit the streets, as other channels and the Internet reported what the Producer’s Diary had broadcast.
I am just one citizen who felt something was wrong with the government’s hasty decision to restart beef imports, but I didn’t feel the urge to join a protest.
Rather, I was left with a bitter aftertaste because what the show was selling was fear and panic. The Hallym University research sampled 500 people and the journalists’ sources were mainly leftist civil groups who said that the have-nots would be the victims in the long run.
I could not help but wonder whether the show was agitating the public, although its producers later issued a statement claiming that they didn’t harbor any political intentions.
As the show was a huge ratings success, it is about to air a sequel on May 13. I wonder whether it will generate the same kind of public fervor.
In the meantime, I have to fight this sudden distaste for instant noodles, cosmetic goods and pills people use daily, which is already giving me a massive headache, even before worrying about getting mad cow disease in 10 years’ time.
sujiney@joongang.co.kr