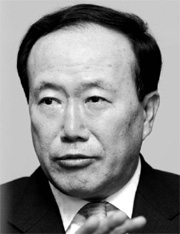 Local banks now charge a fee of up to 3,000 won ($3) to provide remittance services, but an online bank will be able to provide some services for under 300 won, Kim Bong-soo, 55, chief executive officer of Kiwoom Securities Company, pointed out at a recent interview with the JoongAng Ilbo.
Kim is one of the founders of the online brokerage house Kiwoom. Having developed it into the nation’s No. 1 brokerage house in volume of stockbroking, he is now seeking ways to establish an online bank. He is full of hope about Internet banking.
On the other hand, Kim said he feels uneasy about the current online brokerage market. Competition is getting tighter, with latecomers in the market undercutting each other by continually slashing their brokerage commissions. Lately, they have begun to offer commissions below costs. He said the Internet brokerage market has become a “red ocean,” a saturated market of intense competition. It is now difficult to expect high incomes in that market, he added.
Accordingly, Kim is attaching more and more importance to the Internet banking market, which has not yet been created in Korea due to government regulations. He describes its prospects with enthusiasm: online banking will be a real “blue ocean,” a wide-open, uncontested market for early players as he expects Kiwoom would become.
“Kiwoom has accumulated know-how in Internet financial services,” Kim said. “We will be fully prepared, so that we can apply to open an online bank earlier than any financial service company in Korea when the government permits online banks.”
Kiwoom has already dispatched research teams to Japan and other countries, where online banks are allowed, to gather data and information about the new business.
Kiwoom’s efforts may be just in time for an encouraging development in the sector. Late last month the Financial Services Commission recommended to the Blue House that the prerequisites for an Internet bank be eased by lowering the minimum capital level from the earlier-proposed 100 billion won.
“Currently, banks are deriving excessive profits from commissions for remittances and other services, enjoying their sweet monopoly,” Kim said. “They have forgotten that they recovered [from the 1997-98 Asian financial crisis] thanks to public funds, which came from people’s tax payments.”
“We are confident that once we set up an online bank, the bank can lower banking service fees to one tenth of the current rates that banks charge,” he continued. “Because online banks do not need to spend on offline branches and facilities, our online bank will be able to also provide higher interest on deposits.”
What have domestic banks accomplished by focusing on expansion, he asked, criticizing the banks for complacency. The banks, he said, are disappointing the Korean government and the public, who want local banks to grow and compete with multinational investment banks.
Asked whether customers will be reluctant to trade through Internet banks due to doubts about the security of their online accounts, Kim said, “We can build a system safe enough for banking services, just as we did for brokerage services. We will raise around 100 billion won in capital to build a safe system and to deal with all services that offline banks currently provide.”
In the early 2000s Kim had recommended to the government to allow online banks but at that time, the government said it was difficult because the “Real Name” account system requires would-be account holders to personally appear at the bank to open an account.
“But in the future, the government should allow customers who have opened accounts at offline banks and hold identification certificates for online bank transactions to open online accounts in other online financial service companies. In that case, the problem related to the Real Name account system will be solved.”
Kim is rightly proud of Kiwoom’s customer service, which even the brokerage’s rivals regard highly.
Kim said, “Since workers at online financial service companies can meet customers face to face, they need to make more efforts to listen to customers’ opinions and complaints. We consistently seek out customers’ opinions and reflect them in our business, so we developed into a brokerage house that accounts for 9 to 10 percent of the nation’s total stock transactions in the nine years since our founding.”
What did he think about Hana Daetoo Securities lowering its online brokerage commission to 0.015 percent, with other brokerages, including Korea Investment and Securities following suit?
It’s cutthroat competition, Kim observed. Kiwoom’s commission, which was once the lowest in the market, is 0.025 percent.
“The minimum commission that can cover costs is 0.02 percent,” Kim noted. “Anyway, customers will certainly welcome the continued cuts in brokerage commissions. In fact, since our customers have asked us to lower our commission to the level of Hana and other rivals, we are seriously considering it.”
“But such cutthroat competition will bring about shrinkage in investment in future growth engines, such as the nurturing of financial experts,” he continued.
“Ultimately, it will lead to loss of customers due to deterioration in service quality.”
He said Kiwoom would rather focus on lowering commissions in fund management than in brokerage commissions.
Kiwoom will also actively extend its business to overseas financial markets, Kim said. The company recently entered foreign real estate investment projects. It is participating in a redevelopment project near the presidential palace in Uzbekistan, and the renovation of the Ghengis Khan Hotel in Mongolia.
“I have other dreams now in addition to overseas businesses and an Internet bank,” Kim said. He is considering establishing an education and training program to nurture financial experts in Korea.
“Finance needs capital and infrastructure but, most of all, human resources,” he said. “Brokerage houses’ profits have been good beginning last year. In such times, we need to spend on human capital. Without it, an investment bank and overseas businesses would all be impossible.”