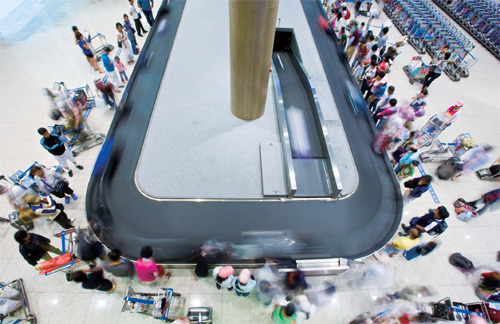 Shopping can be fun when you travel. Some love it so much that they target items to buy at duty-free shops months before they book their plane tickets. It only takes a second before their shopping bill exceeds $400, the maximum value of duty-free items an individual can bring into South Korea.
Travelers laden down with goods that exceed their personal tax-free allowance run the risk of getting hauled over by customs officials at the airport. They never know if they are going to pass through the green channel uninterrupted, or if they get stopped, whether they will have to pay a fine.
As for the customs officers, they know they face a daunting task, but the men and women working for the Korea Customs Office have carefully laid plans to stop tax dodgers.
On average 40,000 people arrive at Incheon International Airport every-day, but currently only 1.2 percent of the total number of arrivals get investigated. The figure dropped from 1.6 percent last year when the number of people arriving in the country sharply rose.
Only 0.2 percent ends up paying a tax for goods brought in.
Most people think customs officers randomly ask passengers to stop and open up their luggage after they have passed through the baggage claim area.
In fact, the customs office carefully selects its targets. Officers check the number of times a suspect has been in and out of the country, his job, the amount of cash he had before his trip and his destinations.
They keep track of sale seasons and major jewelry exhibitions around the world, and if they are suspicious of people traveling in large groups on organized tours, they might investigate the background of everyone on the tour; tax dodgers often work in teams.
If a traveler has repeatedly violated duty-free claims, he becomes the target of a full investigation. 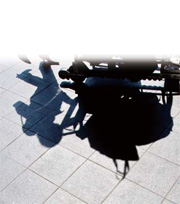 In addition to background checks, undercover customs officers circulate the baggage claim areas. These rovers, as they are known, watch out for suspicious comments and behavior.
An average of 40 rovers roam around Incheon International Airport, looking out for anyone who looks restless or anxious and anyone wearing sunglasses or clothes that look off season.
Often no particular gesture alerts the rovers’ suspicions; they act simply on intuition at times.
“If we are uncertain, we might tap on the traveler’s baggage on his way out to test his reaction,” says Song Chang-mun, a senior rover at Incheon. “If a traveler hasn’t paid the tax on an item, they usually look tense.”
Others have been caught while using their mobile phone away from the crowd.
Rovers are also on the lookout for people who hurry out of the claim area with a small piece of luggage that might contain small valuables like watches or jewelry. Families taking children on holiday outside of vacation season are also scrutinized.
If the customs officers haul you aside at the airport, their first question is likely to be, “Do you have anything to declare?” Hardly anyone answers “Yes” when asked, customs officials explain.
In many cases, passengers say that they have given their duty-free items to relatives or friends who have gone overseas. In reality, many people leave the items with traveling partners. For example, a husband can easily pass his excess duty-free items to his wife or even his children and friends as they pass through the customs channel at the airport.
The customs office doesn’t look kindly on these inventive ways of circumventing the law. They say entrusting goods with other people is one of the most troublesome means of avoiding paying tax.
If a passenger is caught at the airport, he probably won’t give the customs officers the contact details of the people to whom the duty-free items have supposedly been given.
A few try blackmail if they’re found to be lying, officials explain, claiming they know a high-ranking government official who could seriously threaten the customs officer’s position, for instance.
Generally, it takes five to 10 minutes for officers to prove that those passengers under suspicion are lying, customs officials claim.
If they lack evidence, but are sure of the passenger’s guilt, the rovers tail the suspect to see whether he has an accomplice.
Some tax dodgers are driven to extremes. A man was caught giving an expensive duty-free watch to his son. At first, the two insisted they didn’t know each other. When the son later confessed, the father slapped him in the face.
When travelers admit they possess claimable goods, they are considered for a voluntary report and usually have to pay the tax. In this case, their violation is considered involuntary.
In other cases, officials give people a break. Strictly speaking, anyone who spends more than $400 overseas should pay a tax, but officials sometimes give exemptions up to $700. But when violators refuse to admit their guilt, officials enforce a penalty and may seize the goods, which puts the violators’ names on a blacklist.
Not all the items bought are duty-free. There are also goods bought overseas that travelers insist are secondhand goods. But a thorough rummage around the person’s bag might produce a receipt. In any case, they can track purchases through credit card companies.
Local officials are also adept at distinguishing the old from the new by picking up on clues such as scratches and the condition of tags.
The officials also use the Internet to discover the latest tips for people who want to avoid getting caught at customs, such as advising traveling partners to sit separately and removing the labels on their purchases.
Three years ago, the most common products that Koreans bought overseas were cameras and other electronic goods. Nowadays people go for brand-name goods, which means custom officials need to maintain a current list of new brands and their prices.
Another rising claimable item in Korea is expensive wines.
Claimable goods in checked baggage aren’t an exception. Officers working the X-ray machines at the airport tag any suspect items that show up on their screens and then alert officials. And you are more likely to get stopped if you carry brand-name items, officials say.