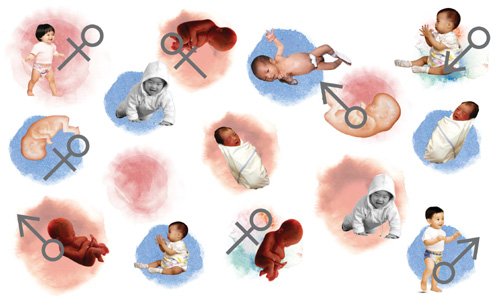 It is illegal for doctors in South Korea to inform parents of the sex of an unborn baby, but in practice it is not that hard for parents to find out that information in advance.
Now the Constitutional Court is wrestling with a decision whether to render the current law unconstitutional, as some argue that it is infringing on parents’ constitutional rights.
A recent public hearing in which arguments for and against the abolition of the law were laid out has caused a stir among parents and civic groups here.
They are questioning the effectiveness of the law, which some view as toothless.
The law in question was introduced in 1987 when South Korea’s total birth sex ratio was 113.7, meaning that there were 113 boys born for every 100 girls.
The government enforced rules to clamp down on sex-selective abortions that favor boys in a society where Confucian-influenced preference for sons still persists despite the country’s modernity and economic strides.
Currently, the country’s sex ratio for a firstborn child stands at roughly 105.6, a sign the law’s critics say is proof enough that it’s time to scrap the outdated law. According to the Health Ministry, the total birth sex ratio is 107.4 in Korea.
Several studies on the subject demonstrate that in any given population there are more boys born than girls for reasons still debated.
However, Kwak Myeong-seop, an official with the Ministry for Health, Welfare and Family Affairs, argues that although introduced 20 years ago to fight old social norms, the law fits well with today’s world.
“Nowadays families often opt to have only one child and we think that girls are now preferred over boys,” he says.
From BABY, page 1. 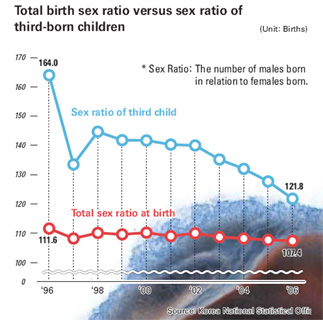 Last year, the average age of South Korean females getting married was 28.1 years old, up by 2.4 years compared to a decade ago, according to the Korea National Statistical Office.
South Korea has one of the lowest fertility rates among members of the Organization of Economic Cooperation and Development. It stands at 1.26. On average in South Korea, women are 30.6 years old when they have their first child. Ten years ago it was 28.3 years. Experts say the overall delay in starting a family and marriage reflects South Korean women’s rising social status as they’ve become more socially active than in the past.
“This law is about preserving a balanced sex ratio just as it is about protecting unborn female babies,” Kwak argues, pointing out that the birth sex ratio for the third child still stands at 121.8; it was a staggering 164 in 1996.
“Preferences to have a boy as the first-born may have shifted but at the end when there are no boys but only daughters in the family, families want a boy,” says the official.
“If we get rid of this law, we’ll see the number of abortions related to sex selection skyrocket,” adds the official who participated in the first public hearing at the Constitutional Court. 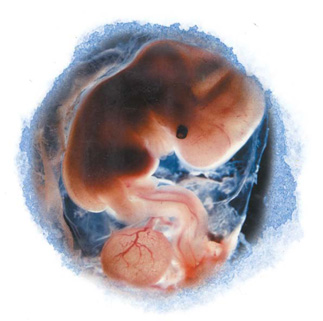 If considered an issue of social importance, the court can opt to have an open public hearing on certain cases.
Chun Byeong-nam, a lawyer who took part in the hearing, dismisses the logic presented by the ministry, that sex-selective abortion is a driving factor for abnormal sex ratios.
“How many families nowadays do you see having a third child? At the most they have two,” says Chun. “The fact that the current birth sex ratio is in line with the normal sex ratio of the total population is proof that society has changed to a neutral standing regarding the sex of unborn babies.”
The lawyer adds that amendments to the law are needed to reflect the reality in hospitals. Of the babies born last year, 9.4 percent (46,000 babies) were a third-born children in the family, according to the Korea National Statistical Office.
In South Korea, despite the illegality, persistent parents can often persuade doctors to reveal their unborn baby’s sex.
“They didn’t tell us directly but they gave us enough hints to figure out that we had a boy,” says Mr. So, 34, who wants to be identified only by his last name. Often, casual remarks such as, “The baby will become a general,” are dropped by doctors that give away the sex of the unborn baby when pressed by parents.
“You are trying to enforce a rule that has been practically dead for some time. Why not find a way to reduce crime?” says Chun.
He represents a doctor who was sued by a mother whom he told might have a boy. According to Chun, the mother ended up having an abortion due to complications during her pregnancy. The unborn baby turned out to be a girl. “She got upset and blamed the doctor for everything,” Chun claims.
Experts say that the availability of ultrasound technology has made sex-selective abortions easier. Chung Mi-a, an official at the Korean Society of Ultrasound in Obstetrics and Gynecology, says the technology became more widely available in the 1990s.
Out of the 340,000 abortions performed in South Korea each year, the Health Ministry estimates that roughly 1 percent were sex-selective terminations. Nevertheless, experts consider such estimates conservative. They think that the real number is much higher.
Abortions are illegal in South Korea except in a few special cases, such as when the pregnancy is a result of rape or incest or if there is a risk to the health of the mother or the unborn child. Doctors and medical staff breaking the law face up to two years in prison and can lose their license, but few cases have gone to court. Ironically, doctors who only reveal the sex of an unborn child get a stiffer sentence, as they can lose their licenses, get up to three years in prison and get slapped with a maximum fine of 10 million won ($10,000).
Sex-selective abortion is not unique to South Korea. India and China also deal with abnormal birth sex ratios. According to the CIA factbook, the former stands at 1.12 while the later at 1.11. The ratio in the United States is 1.05.
Just last month, Indian Prime Minister Manmohan Singh urged stricter enforcement of laws that have been in place since 1994 and were designed to prevent doctors from helping parents get rid of unborn daughters.

In its last official population census in 2001, India posted a 107.9 sex ratio, a number that has been steadily rising since 1981.
The rise was credited to the introduction of new methods of prenatal sex determination such as ultrasound technology.
The National Bureau of Statistics of China put the sex ratio at birth for last year at 120.22 in what experts have said is the result of the still prevailing cultural preference for boys coupled with China’s one-child policy, which was imposed in 1980.
China also enforces laws making it illegal for doctors to reveal the sex of unborn babies.
Scholars here are sharply divided on this issue, and religion influences people’s opinions. An estimated quarter of the population here considers itself Christian. “Having the law gives doctors and parents something to think about. It’s a mental barrier,” says Lee Dong-ik, a professor at the medical college of the Catholic University of Korea.
“Realistically, parents need to make preparations such as clothing for the coming baby,” Kim So-yun, a professor of bioethics at Yonsei University, says. “Telling parents the sex of unborn babies in the later stages of pregnancy should be fine. It’s usually unrealistic to get an abortion then anyway.”
“The doctor has every right to inform the patient about information that was acquired through medical treatment,” says Kim Ju-gyeong, an official of the Korean Medical Association. “And to know that information is the right of the parents.”
The Constitutional Court is expected to make a ruling on the issue within weeks. Out of its nine judges, at least six are needed to rule an existing law as unconstitutional.
Whatever the outcome, it will take some time to kill old habits that have been ingrained for centuries, scholars say, especially in rural areas. “People say, ‘Daughters are fine,’ but they mean for others, not for their own family,” says Kim Seo-jung, another official at the Health Ministry. “It won’t get solved in the short term. This is part of the culture.”
Therese Hesketh of the Institute of Child Health at University College London and Zhu Wei Xing of China’s Zhejiang Normal University warned in their 2006 research published in the Proceedings of the National Academy of Sciences that South Korea could already have a male surplus of 200,000 to 300,000.
“We believe that both the population sex ratio and the sex ratio at birth will gradually decline over the next two to three decades in these high-sex-ratio countries. However, the damage for a large number of today’s young men and boys has already been done,” the researchers say.
Another research report, “Son-biased sex ratios in the 2000 United States Census,” published recently by Douglas Almond of Columbia University and Lena Edlund of the National Bureau of Economic Research, says, “In a sub-population with a traditional son preference, the technologies are being used to generate male births when preceding births are female.”
Almond and Edlund’s analysis of the 2000 US Census revealed that there was a male bias particularly evident for a third child in the United States born to Chinese, Korean and Indian parents. The study was published in the Proceedings of the National Academy of Sciences.
Among the older generation, especially those who are waiting for a grandchild, the preference is clear. Although they don’t adhere to past practice as strictly as before, the oldest sons are often expected to take care of the parents in their old age.
“Still, it would be nice to have a boy as the first child in a family,” says Chung Gyeong-ja, 64, a mother of two, with no grandchildren.
“The family lineage has to continue.” africanu@joongang.co.kr