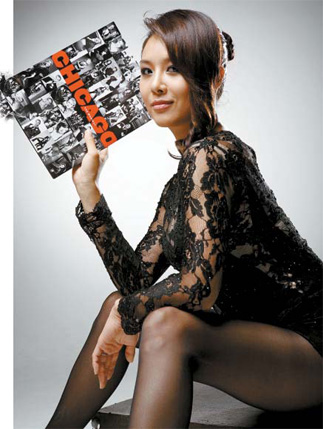 At one point Ok Joo-hyun, 28, was very clear during the interview. Without hesitation she said that women who are careless of their appearance are lazy.
“Such women not only look lazy but they also appear pathetic,” said Ok. “When I took a break from work I gained two or three kilograms as well,” said Ok. “But I never skipped my diet and exercise.”
Ok may sound obnoxious but she has worked hard on the looks she is so proud of today. “I believe self-management helps to build self-confidence and I want to be Ok Joo-hyun who isn’t ashamed.”
In May 1998, Ok debuted as the lead vocalist with a powerful voice in the four-member K-pop band Fin.K.L. The band made it to the top of the Korean music charts with hits like “Blue Rain” and “Ruby.”
In May 2003, Ok went solo. Later this month, she is releasing her third solo album. She is also hosting radio and television shows.
In the beginning, Ok was often ridiculed for her chubby appearance in comparison to the other band members, who were very slim.
So Ok went on a diet and took up yoga.
On April 28 this year, Ok won the award for best female musical performance at The Musical Awards for her role as Roxy in “Chicago,” which was staged last summer.
“My eyes welled up because it was an award I didn’t expect,” said Ok.
It wasn’t easy for Ok to transform herself into an appreciated musical performer after having been a member of a hip K-pop band.
Ok did her first opera in 2005, taking on the title role in “Aida,” a production that cost 1.2 billion won ($1.1 million) to stage.
However, despite her efforts, critics panned her performance. They said she was a wooden actress and couldn’t deliver a line clearly.
But the music critic Cho Yong-shin said her performance as Roxy was highly authentic.
“Chicago was a piece I really wanted to do,” said Ok.
“Playing black comedy came as a burden but I tried really hard to make the character mine,” Ok added.
“Roxy is a lively and straightforward character, very much like me. But unlike me, who often thinks too much, Roxy is simple and easily caught out when she tries to be witty,” she added.
Ok said living the life of such a character was what made acting interesting.
Ok said people think of her as confident when she is on stage. “The truth is, I have a lot of fears,” said Ok.
When she sang on stage in Fin.K.L, she couldn’t stand straight. When she performed in Aida, her heart shrank because her role was just too big.
“But when I played Roxy all my fears were gone,” Ok said. She said she convinced herself that she was perfect for the role and worked hard on building her confidence.
“Originally my dream was to become a musical performer,” said Ok.
“That’s why I started to learn how to sing. I loved going to performances and exhibitions and I wanted to be part of that culture,” said Ok.
“The job of a celebrity is to provide dreams and fantasies to the public. To be able to do that, you have to put in a lot of work,” said Ok on why she keeps herself in peak physical condition.
In July this year, Ok will reprise her role as Roxy in the musical Chicago.