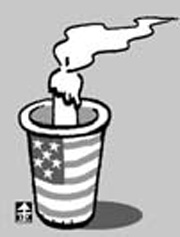 The son of Confucius, Kong Li, was scolded twice while passing through the yard where his father stood. Walking so pressingly close to his father with his head bowed was acceptable. Nonetheless, his father called upon him.
“Did you learn the poems?” “Did you learn the etiquette?” Confucius asked. He meant that, to become a respected person, one had to learn both. For Kong Li, confessing, “I did not learn them properly,” must have been a difficult moment. Jeong-hun, literally, “garden teaching” is a Confucian concept of family instruction; parents enlighten their children in the family garden.
Passing down knowledge and experience to descendants is important regardless of the place or time. Many writers, public servants and even emperors left many valuable teachings for their children.
Zhuge Liang left his “Article to Admonish Descendants” which became widely known through the ancient novel “Romance of the Three Kingdoms.” He left some of the most astounding teachings as his legacy, in a book written by 54-year-old Zhuge to instruct his eight-year-old son. It is worth listening to, given the father’s legacy as the statesman, on whom depended the fate of Shu-Han, the weakest of the Three Kingdoms depended.
To his son he emphasized the virtues of remaining pure and serene without any biases. Zhuge Liang wrote that without these qualities, it is not possible to realize one’s wishes and get far.
If we don’t have a clear heart, then, we can’t realize our wishes. If we are swept by external biases, neither can we attain our goals. These teachings have since become maxims. There are people who hang inscriptions of such wisdom on their walls to guide their hearts.
Our youths, who should stand serene as trees with deep roots and make all efforts to bear good flowers and fruits, are being easily swayed. Despite many faults to be found in arguments opposing U.S. beef imports, they have been moved to join candlelight vigils.
However, if we think twice, the real problem lies in the people who are shaking the youth’s serenity. Who are these people that, instead of teaching serenity and purity of heart to our youth, are rousing and provoking them with biased false assumptions? We want to know their true colors.