[Review]Indecision strikes gals of all ages

[Review]Indecision strikes gals of all ages 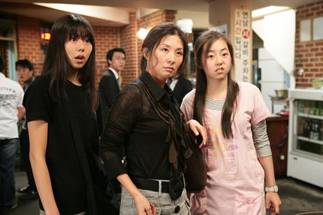 The film features, from left, Kim Min-hee, Lee Mi-suk and An Sohui. [MovieWeb]

“Hellcats” is not as provocative as its trailer implies. What audiences bring home, instead, are the problems that befall each character in the story.
Based on Kang Mo-rim’s comic strip “10, 20, and 30,” Hellcats presents various aspects of life and relationship struggles through the three main characters in different age groups.
Ah-mi (Kim Min-hee) could be the typical leading character for any chick flick. She is a 27-year-old scenario writer struggling in her career and love life. If Hellcats were only about the life of a 20-something single woman, it would have been no different from Kwon’s previous hit movie, “Singles” (2003).
But Hellcats features two other leading ladies, Young-mi (Lee Mi-sook), a 41-year-old single mom, and her daughter Kang-ae (An So-hui), a curious teenage girl, which makes the story more intriguing to viewers in various age groups.
Young-mi, Ah-mi’s older sister, is devastated after learning about her early menopause. Middle-aged women viewers worried about their fading femininity could sympathize with Young-mi’s despondency.
Kang-ae is confused about her sexual orientation after an accidental first kiss with her best female friend. Such an incident is actually very common among Korean teenage girls as they cannot distinguish love from friendship.
Ah-mi’s troubles begin when she decides to go on a blind date, even though she already has a boyfriend. The blind date ends up being a guy who would be perfect marriage material, but Ah-mi feels guilty. She goes to her boyfriend’s house, only to find out that he has been cheating on her. She breaks up with him and starts seeing the new guy.
Yet she faces another problem: She is ambivalent about whether to stick with her unstable career or get married and be done with her miserable struggles.
Most independent women hate to admit that marriage is an escape from harsh reality. They do not want others to think they run away from reality, get married and find shelter in marriage. But they have to make a decision at some point.
As decision time for Ah-mi draws near, she grows more confused about what she wants. She just feels the urge to run away from where she is, and many female viewers can’t help but feel empathy for her.
Hellcats doesn’t have a happy ending, but it’s not a sad ending, either. As in reality, Ah-mi’s life doesn’t end once she’s made her choice. Life simply goes on.