Camping under the stars in a city setting

Camping under the stars in a city setting 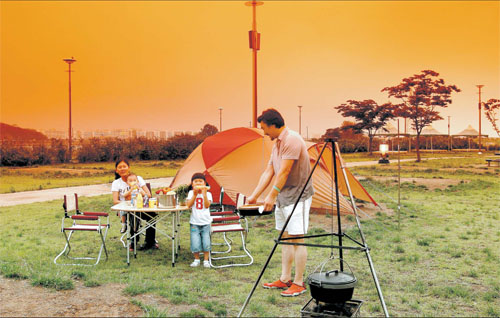 A family gets ready for a cookout at the campsite on Nanji Island. [JoongAng Ilbo]

Camping is all about outdoor adventure. You pitch a tent in the middle of nowhere for a night under the stars. You want to be as far away as possible from civilization to smell the campfire smoke and the crackle of firewood.
Camping begins with an urge to escape the hustle and bustle of the city and get closer to nature. But with limited time — due to our busy lifestyles — an extended trip to the countryside is hard to arrange.
But there is another option: a camp site located in the heart of Seoul called the Nanji Camping Ground on Nanji Island, northwestern Seoul.
You don’t need to prepare much before you hit the trail like picking a spot and contacting the park rangers. There’s also no need to bring cumbersome camping gear like tents or an ax to chop firewood. The camping ground is already equipped with all the equipment you could possibly need for a fee. You can get tents, blankets, mats, lanterns, burners and barbecue grills.

There are also outdoor kitchens, shower stalls, washing machines and a convenience store that sells meat for your barbecue.
With such facilities, the site can host as many as 600 campers.
The island is located near the Seoul World Cup Stadium in Sangam-dong. The campsite was built in 2002 to accommodate visitors to during the Korea-Japan World Cup in June that year. Seoul City entrusted the area to a private developer.
It’s surprising to see such greenery on the island. Nanji Island was part of a 6.6 million-square-meter landfill from 1978 to 1993.
The island was no haven for nature nor wildlife, owing to Korea’s rapid industrialization. Nanji overflowed with trash and produced methane gas and toxic water.
The Seoul city government decided to take action to restore the island’s habitat and get rid of the pollution.

The wasteland was turned into a recreational area and now incorporates five natural parks: Pyeonghwa (Peace) Park, Nanji Stream Park, Hangang Park, Haneul (Sky) Park, and Noeul (Sunset) Park. There are also nature preserves, plazas, riverside lawns and a camping ground.
Today municipal gardeners grow barley, vegetables, peanuts, flowers and willow tree seedlings there.
Nanji is made up of two words: nan or orchids, and youngji, or mushrooms, because the area used to be known for those plants. It’s also called Duck Island, because it’s shaped like a duck on water.
The camp is located along the Island’s Nanji Stream. Once you get there, the city seems far away. That said, camping here doesn’t compare to pitching a tent in a forest far from the city and you won’t see much wildlife.
On the other hand, you won’t run out of water and you can get involved in a number of other activities: bicycling or inline skating along the Han River, yachting, playing basketball or just picnicking. 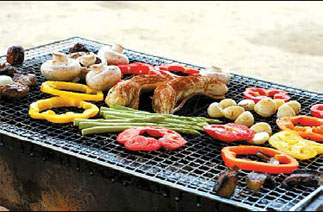 You can prepare your own food at the campsite on Nanji Island. [JoongAng Ilbo]

Over the years, camping here has become immensely popular and you are advised to book in advance.
Different tents are available for rent, such as the classic hexagon tent or a more exciting yurt, a Mongolian tent, or a Native American tepee.
When you arrive, the tents are already pitched so you don’t need to fumble around with complicated tent poles and pegs.
“It’s like a rustic hotel,” said Algie Cucuzella, an English teacher in Korea who was camping with 10 of his friends.
“It’s well organized and close to nature,” he added, pointing to the vast grassy field before him.
Cucuzella came across the city’s camping site on the Internet while searching for the DJ Festival taking place nearby.
He and his friends planned to stay for two nights and three days — they rented a yurt.
“Though it’s not proper camping in the woods, there are loads of natural spaces for families and kids, along with drinks and foods,” he said.
Kim Tae-yeon, who was grilling some fresh shrimps and clams, said, “Nanji Camping Ground is where Seoulites can camp without stress.”
She said it’s rare in a city like Seoul to enjoy a barbecue among wild flowers with a view of the peaceful Han River.
As a housewife, she said, “If you grill meat at home, the whole house is filled with the smell of cooking meat.”
After you check in at 11 a.m. you can go inline skating, bicycling or yachting along the Han River.
If you don’t have enough time to stay overnight, you can also register just for picnicking.
All you need to do is borrow a shadetent, if you wish to stay out of the sun.
“There are some downsides, though,” said Park Hee-sung, 30, a keen camper at Nanji. He has been visiting the ground since 2003.
He said that as the site has grown in popularity, it has become more expensive and commercial.
“Living nearby, my friends and I always have get-togethers here at the camp ground,” Park said. “It’s way better than meeting in a crowded restaurant.”
But Park says the camping ground is different now.
Ever since the site was featured on a television program, more people have been visiting.
“It’s become crowded,” Park, 30, said, noting that to get a spot with a nice view, you need to get there early. Before, they were able to get a decent spot even if they came in the late afternoon.

Also, Park said the camp charges a lot of money for materials that were once free in the past, for example, the shade- tent.
Bae Sung-hwan, 30, said there more restrictions than before on what you can and can’t do.
“You’re not allowed to skate or ride a bicycle in the campsite,” he said. “The safety officers, who are randomly posted throughout the site, will not allow running, sports, fireworks or a campfire,” Bae added, with a sigh.
“Camping is supposed to be a family leisure activity — simply eating and sleeping in tents isn’t camping.”
“But I guess there aren’t any other places where you can see the Han River and cook at the same time.”

Any camping trip requires basic equipment — even if you’re camping in the city.
Though Nanji Camping Ground provides the basics, you can save a few dollars by taking some of your own gear.
You can take your own tent, especially since most tents are already booked until July. Also, since it is still chilly at night, take extra blankets and clothes. You’ll need a sleeping bag until summer really hits.
And you’ll need food. For an evening feast, buy fresh seafood from local fish markets, sausages and vegetables. Most Koreans bring samgyeopsal, or pork.
If it’s your first time grilling, ask neighboring campers for help. Getting a fire going isn’t that easy. You’ll need charcoal, newspaper, wood and matches.
Camping gear is available for rent at the camp ground, but check ahead for availability.