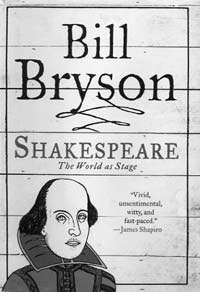 Shakespeare: The World as Stage

After reading Bill Bryson’s take on Shakespeare, I’m up for more. His take on the Sino-Japanese War? The history of Silly Putty? The great debate over U.S. beef in Korea? I’m there.
In the style of his well-known travelogues, Bryson deeply researches the world’s greatest writer, then tells the story in his breezy style.
Tellingly, Bill Bryson’s name is in much larger type on the cover than the actual title of the book: “Shakespeare: The World as Stage.”
That’s because, let’s face it, this tome doesn’t add anything new about the bard.
Bryson brings his dry, witty take to one of the most-written about yet least-known subjects in world history. The basic known facts about William Shakespeare are pretty sparse, as records were just starting to be kept during his lifetime (1564-1616). In fact, the details fit into about a paragraph.
As Bryson says, Shakespeare was born in Stratford-upon-Avon, married and had a family there, went to London, became and actor and writer, returned to Stratford, made a will and died. There are a few other details, but they don’t add to much.
Historians have found about 100 documents about Shakespeare. Throw out the minor lawsuits, baptismal records, tax deeds and such, and you’re not left with much.
Still, more than 10,000 books have been written about the bard and thousands more stories and articles are written each year.
This book is part of the “Eminent Lives” begun by the editor James Atlas.
John Shakespeare, his father, grew up on a farm in nearby Snitterfield but came to Stratford as a young man, which, as Bryson notes, spared “posterity from having to think of his son as the Bard of Snitterfield.”
John Shakespeare became a well-known public official, ascending to high bailiff, which was essentially the local mayor. He dropped out of public life in 1576, “for fear of process for debtte,” as one church record put it.
That’s a repeated theme in Bryson’s book: Here’s what we know, and that’s it. That means we can only speculate about some details.
Was Shakespeare gay? He wrote sonnets expressing love for a young man, but we know he married and had kids.
Religion? He attended a Catholic church for a while. That’s what we know. Nothing more.
Did Shakespeare actually exist? Barrels of ink have been spilled saying Francis Bacon or Christopher Marlowe might have been the real playwright. But it’s clear from existing tracts, records of his plays and his will that Shakespeare existed, Bryson says. It would have been quite a conspiracy to forge those few documents. And there would be no point, Bryson says. Bacon died too early and Marlowe wasn’t around at key times.
Amazingly, we don’t even know how to spell Shakespeare’s name. Bryson notes there are only six recorded Shakespeare signatures, three of them on his will.
On top of that, he abbreviated his name each time — except once when he wrote William Shakspeare and once when he wrote William Shakspere.
I have small complaints. There are moments when the tight writing unwinds and gets sloppy. I had to go back and read sentences two or three times to figure out which pronoun referred to whom. Also, Bryson tends to repeat things and the middle section of the book drags.
These, however, are minor nitpicks. Bryson is one of my favorite writers and I recommend this book as an entertaining and educational read.

Shakespeare: The World as Stage