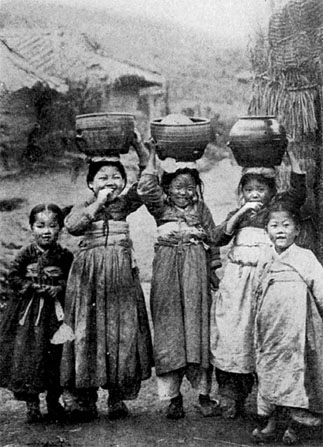 Girls go about their chores in the late 19th century in a picture from Minerva Guthapfel’s book“The Happiest Girl in Korea.”

“Its name was ‘Seoul’ [Soul], the country’s name Korea, or the Land of the Morning Calm, as the ancients called it. Much of the interest might be told of this quaint old city, with its peculiar looking white-clad people and funny straw or tile-roofed houses.”
To the eyes of American missionary Minerva Guthapfel, early 1900s Seoul and its people were a peculiar sight. Guthapfel, a member of the Women’s Foreign Missionary Society of the Methodist Episcopal Church, lived in Korea from 1903 to 1912.
Besides the first-hand account of the cityscape and people’s clothes, Guthapfel introduces readers to the lives of people she met during her mission. One of them is “Oak-pun-ie,” who lost her hands and a foot to frostbite.
The girl calls herself the “happiest girl in Korea” despite the poverty and slavery she was born into.
The author also writes about an unwelcome baby called “Sup-sup-ie,” which means disappointment, underlining the traditional preference for boys.
Guthapfel’s book “The Happiest Girl in Korea” has been translated into Korean and published as “Joseon Girl, Oakpunie.” Along with it, two other old foreign documents have been translated: “Korea and the Sacred White Mountain” by British army officer Alfred Cavendish and “Historia De Japam” by Portuguese priest Luis Frois, which mentions Korea.
“In order to help the international community understand our country, it is important that we first understand how it viewed us,” said Yoon Ji-kwan, director of Korea Literature Translation Institute.
“[The translations] were very challenging. Since it was the first-ever translation of those documents, there were some unfamiliar terminologies and contexts,” Yoon added.
The organization has been translating books on Korea written by foreigners with Myongji University-LG Yeonam Library since 1997. Among the 10,000 books collected, 100 were selected. The aim is to publish 10 to 20 every year.
Cavendish traveled to Mount Paektu on foot in 1897 as a member of a special delegation sent to mark Queen Victoria’s Diamond Jubilee. He later describes the streets of Seoul as “narrow and tortuous; on each side was a gutter, into which the refuse and sewerage of the house was put.”
Cavendish is not shy about sharing his critical views of the unsanitary conditions, corruption and contempt shown to small-town life shown by Seoul-born men.
He also portrays Koreans’ strong love of smoking: “A Korean is hardly ever seen without his long-stemmed pipe, the head of which is often of jade, though generally of brass and the quantity of tobacco he gets through in the year must be enormous.” 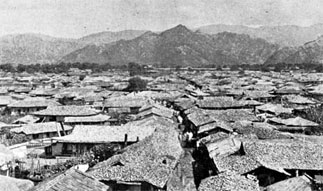 A view of Bukcheon county from “Korea and the Sacred White Mountain” by Alfred Cavendish. Provided by Myongji University-LG Yeonam Library

“We chose books that are of special value in terms of politics, economics and society,” said Chung Sung-hwa, a history professor at Myongji University who participated in the selection and translation process. “They present an interesting array of perspectives on our country.”
Historia De Japam is mainly about Japanese history but the last 10 chapters contain a vivid account of the Japanese invasion of Korea in 1592, better known as the Imjin War in Korea. The document holds an unparalleled academic value as the author was one of the few foreigners to witness the historic battle.
The book also gives a rare look into the so-called Hermit Kingdom, detailing the geography, climate, agriculture and longtime relationship with China, in contrast with the closed-door policy to the West.