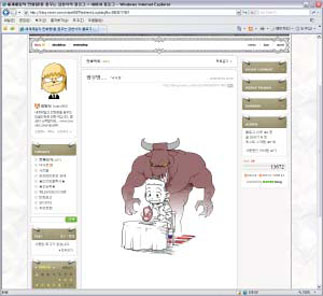 Dramatic drawings and pictures played a part in the recent turmoil.

In 2004, 626 new words made their way into the “New Words Book” published by the National Academy of the Korean Language.
Among them was akple: Ak in Korean means malicious and “-ple” comes from the English word “reply.” Together the word refers to malicious replies or attacks posted on message boards.
Online attacks have become so cruel, leading to a number of lawsuits, companies and hospitals going out of business and even the suicide of a celebrity.
“When anonymity is guaranteed, people release their repressed feeling,” said Yang Yoon, psychology professor at Ewha Womans University. “So they say things they won’t even imagine doing in person.”
As online attacks snowballed into a major social problem, the government adopted “identity checking regulation” in 2002 for portal site operators. Under the new rule, people had to input their resident registration number in order to post messages. 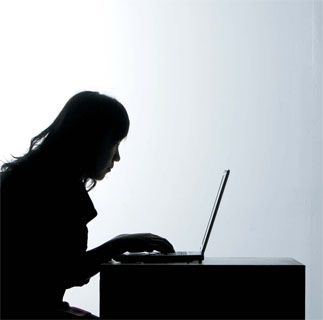 “Yahoo U.S. doesn’t ask its users to enter their social security number,” said an official at Yahoo Korea. “It’s because people in the United States are very cautious about giving out their personal data. But we are encouraged by the government to check people’s registration numbers and so are other search engine operators.”
But the regulation has faced continuing criticisms that say it infringes on freedom of speech and human rights by increasing the risk of their personal data getting leaked. Such concerns escalated after the recent massive information leak at Hanarotelecom, the nation’s No. 2 provider of high-speed Internet, and Auction.
“Identity checking isn’t the solution to tackling rumors and attacks online,” said Hwang Sang-min, a psychology professor at Yonsei University in Seoul. “The policy doesn’t really address people’s inclination to listen to mainstream opinions instead of the authorities.”