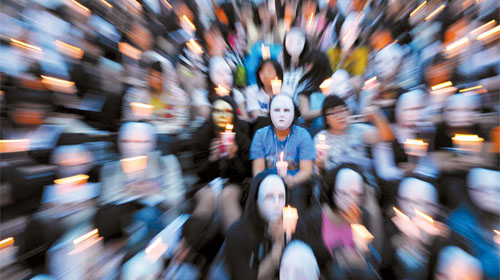 “Mad cow, crazy cow!”
“Unless you want to die from mad cow disease, join the rally tonight!”
“In the United States, even a vegetarian has died from mad cow disease.”
“Mr. President, you say you will revive the economy. But what good will it be if we all die from mad cow disease?”
This is what you get when you type “mad cow disease” in Korean Internet search engines. They are from grassroots sites like personal blogs, chat rooms and bulletin boards. They’re not from news sites or other credible sources.
But those postings are just a prelude to far more shocking images, cartoons and user-created content you’ll come across online. 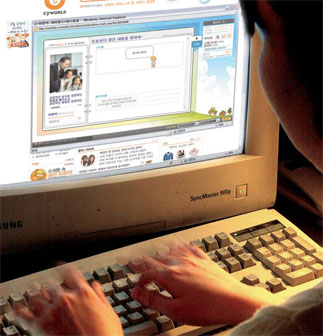 President Lee Myung-bak’s blog has been closed due to a flood of online attacks and criticism. [JoongAng Ilbo]

They include a chilling drawing of an innocent-looking boy eating a piece of meat as a Satanic-looking cow looms over him, gruesome images of dying cows and disturbing videos of patients allegedly suffering from mad cow disease.
In response to the Korean government’s recent decision to fully resume the imports of U.S. cows, the sea of information has transformed into a sea of horror stories.
Those stories use provocative and sensational words and pictures and little, if any, factual basis. They have spread like wildfire on the Web, bringing over 10,000 angry Koreans onto the streets in protest over U.S. beef imports.
They have also triggered anti-government sentiment on the Internet, fueled by mounting criticisms against the Lee Myung-bak administration’s policies on the United States in recent days.
No matter how over-the-top and stretched it may sound, over 1.2 million people have signed a call to impeach President Lee on the portal site, Daum.
While this may be a case of a slight online fever, President Lee’s approval ratings continue to look shaky. A recent survey showed that Lee’s approval rating was in the upper 20s, dropping by 20 percentage points over the last two weeks.
“Online rumors can be found in other countries, too. In the U.S., some people argue that Elvis Presley is alive.
Others say they’ve met aliens. But a majority disregards [the stories] as mere nonsense,” said Hwang Sang-min, a psychology professor at Yonsei University in Seoul. 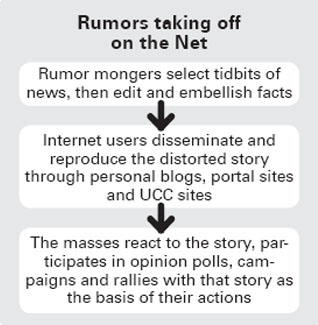 “But when people lose their ability to judge for themselves what is true and false, what is common sense, feasible or not, we have a problem. That’s exactly why the horror stories have become rampant on the Web.”
Hwang said the problem is partly cultural.
“Koreans have a tendency to put more importance on what others think and say than developing their own thoughts and voice. It is because the authority infrastructure has collapsed and lost credibility among the general public,” Hwang said.
Mad cow disease is not the only source of scare stories provoking the Korean public. There are also online tales that President Lee had given up the Dokdo islets to Japan.
The cluster of islets in the East Sea has been the subject of an ongoing territorial dispute between the two countries. A government official denied the accusation.
“Fear is in everyone,” explained Yang Yoon, psychology professor at Ewha Womans University. “But most fears are vague and irrational. They don’t work in scientific and logical fashion. That’s why it’s easy to manipulate fear.”
Prosecutors on Wednesday said they would investigate people who created and spread false online content that has caused the recent fears over U.S. beef imports, and their actions will be considered cybercrime. But experts say the crackdown may not end Web-based scare-mongering.
They say the unique characteristics of the Internet have played a big part in disseminating these horror stories. Experts say the Web is dominated by teens and people in their 20s searching for something new.

“They won’t just settle for common phrases like ‘There is a risk of mad cow disease,’” said Bae Yeong, a professor of information sociology at Soongsil University. “Instead, they use dramatic phrases like ‘A man has died in Ulsan of the disease.’”
Such online posts will have a greater influence on pubescent teens, experts say, whose emotional ups and downs made them more susceptible to peer pressure.
“The younger generation tends to think of the Internet as a playground that is distant from reality,” explained Yoo Seok-jin, politics professor at Sogang University.
“They feel more excited when their content makes people react. The flurry of rumors surrounding mad cow disease has caused the agriculture minister to hold a press conference. This would have made the rumor creator go ‘All right. Let’s see what else I can make them do.’”