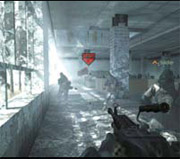 First-person shooting games have been around for a long time. Every year a new cadre is added to the genre but only the really good ones stick around to see a sequel.
The fact that “Call of Duty” has four installments speaks for itself, but the latest installment has outdone its predecessors.
For beginners, the game sounds and looks great, accurately resembling everything in a war zone. The distant rifle sounds and the shooting of an enemy AK-47 sound just right.
The basic scheme is very simple: Players have to get from point A to B alive, either as a SAS operative or a U.S. Marine.
For the PC version, the multiplayer mode lets up to 32 players fight on 16 different maps, of which some are from the single player missions. Available both on XBOX 360 and Sony Playstation3, multiple missions can be played by up to 18 players.
I had heard that the single player mode was short, but when the end came after playing less than six hours, I was surprised. Still, there are some interesting aspects of the game that makes the single player mode worth playing. For instance, if you kill three enemies without dying, a UAV drone will be called up, giving you a radar to mark enemy positions on your map for a limited time. A five-kill streak gives you the ability to call in an air strike that can be placed anywhere you want. Seven kills render a helicopter for support that automatically provides cover fire.
Any avid fan of FPS games has to play this game just to see how far the genre has evolved, and even the short single player mode offers enough to play this game several times. Besides, there is always the multiplayer mode that will give you and your friends hours of fun.