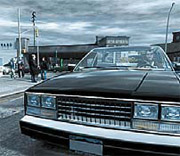 The streets in Liberty City are cold and unwelcoming as you step off the boat to greet your cousin. Warm laughter and a pat on the back gives a bittersweet feeling in an otherwise dark and lonely night in this new land, as you drive your cousin back to his run-down, cockroach-infested apartment. Welcome to “Grand Theft Auto 4.”
Rockstar North, the developer, has managed to portray a real sense of human drama with characters that all exude a “New York attitude.” The single player portion plays like a well written novel, with deep themes such as the rich and famous vs. the poor and underprivileged, morality vs. survival.
Visually, the game is a true testament to the power of the next generation. The cityscape seems endless and even the smallest details are brought to life to add an unprecedented amount of realism. You can see paint scraped off the side of your car when you barely escape crashing into a wall, you can spend hours listening to talk radio stations, or simply watch TV in your apartment.
There are limitations: The Xbox 360 is rampant with pop-ins and the PS3 version has some minor slowdowns in frame rates. But neither of these bring down the experience. The only frustration comes when you have to start from scratch if you make a mistake in the latter parts of the mission.
The improvements in the game include better physics and animation, a GPS system that directs you where you need to go, and a more sophisticated combat system.
The biggest addition, however, is that an online multiplayer has finally been implemented for the series. With several modes it adds much replay value even after completing the huge and expansive single player portion of the game, in addition to the numerous things you can do in this virtual New York City.