The feng shui and torture beneath Japan’s colonialism

The feng shui and torture beneath Japan’s colonialism 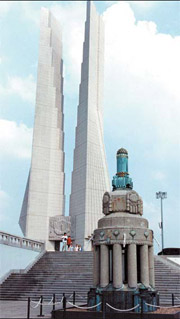 When the Japanese broke ground to build their General Government Building within the walls of Gyeongbok Palace in 1916, they sought to rob Koreans of both their land and their spirit.
The Japanese colonial building was built on palace grounds to break the flow of the Joseon Dynasty’s feng shui, historians say. The Japanese believed that constructing the massive building would quash the palace’s natural spirit, and thus keep Joseon under its rule for eternity.
Until its demolition in 1995, half a century after Korea reclaimed its independence, the Japanese General Government Building was a symbol of Korea’s dark and shameful history and colonial oppression.
The building, which was completed in 1926, served as the headquarters of the colonial government until the war ended in 1945.
Japanese Field Marshal Terauchi Masatake oversaw the building’s construction. Part of Japan’s ambition to take over China included erecting an edifice here bigger than the British colonial government buildings in India and those of the Dutch in Borneo. 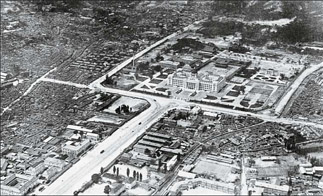 An aerial view of the Japanese General Government Building.

German architect George De Lalande, who also designed the original Westin Chosun Hotel, drew up plans for the Japanese General Government Building.
The five-story building and its basement was constructed on a 97,000-square-meter plot. Many of Gyeongbok Palace’s original structures — 19 buildings and 22 gates — were dismantled during its construction.
From 1926, seven Japanese governors ruled Korea from the Japanese General Government Building. Many Korean independence fighters were tortured and killed in the basement of the building. Before the building’s demolition, its subterranean torture cells were opened to the public for the first time since 1945. 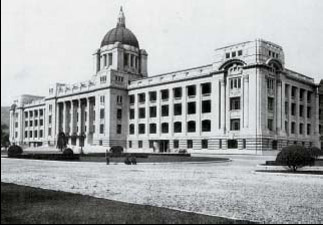 A closer look of the building during Japanese colonial rule.

But the Japanese government’s plans to take over Asia ended when the Allies marched into Seoul in September 1945. The Korean government then made the building the home of the National Assembly. Korea’s first elected president, Syngman Rhee, was inaugurated in 1948 on the steps of the same building. The building remained the seat of the Korean government until 1983. After massive renovation, it became the national museum in 1986.
Even so, its past as a major symbol of Japanese colonialism was enough motivation for its demolition, part of Korea’s 50th anniversary celebration of World War II’s end.