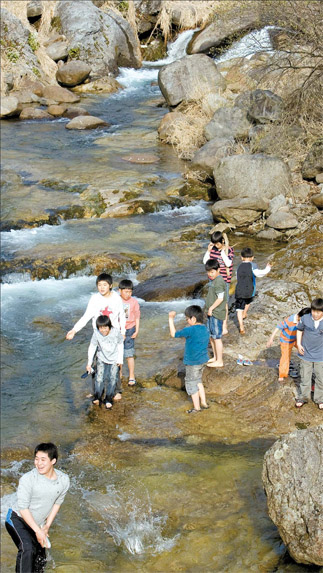 Children on the rural program play in rock pools near Handemy Village.

Chan-ho! Your bicycle has arrived!”
Somebody lets 8-year-old Ko Chan-ho know the gift his dad sent from Seoul has arrived.
Ko and his older brother Jun-ho, 11, stop cooking a panfried dish they were making with azaleas and take a quick spin around Handemy, a village in North Chungcheong.
The brothers joined a specialized program in Handemy last month for city students to spend time in the countryside.
Korean parents are known to push their kids to the limit when it comes to studying. Cram schools are almost mandatory here as college education is viewed as crucial for one’s success.
A diploma from a renowned college goes a long way in terms of job security and nurturing connections. 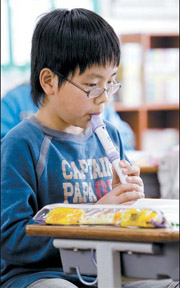 Kim Woo-jin, 11, is one of several children to benefit from life beyond cram schools.

Nevertheless, although not a trend, some parents opt to send their children to specialized rural programs.
They want to give their kids an experience they would never get in the city.
The case of Chan-ho and his brother Jun-ho, both students at Daegok Elementary School in Gyeonggi, is typical.
Until recently, the siblings were no different to their classmates. Their parents both work and their grandmother looked after them while their mom and dad were out of the house.
Jun-ho took classes at a cram school where he could get help in exam subjects after school. He usually got home at 8 o’clock in the evening.
His schedule was timed so that he got home at the same time as his mother, who works in the public sector.
There are other kids like the two boys. Jae Min, 11, who attends Wolcheon Elementary School in Seoul, spent last semester at the Sanchon Center in North Jeolla.
“He was suffering from stress because of the atmosphere at his school. Many students there prepare for specialized high schools,” says his mother, Jang Yu-jin, 43. 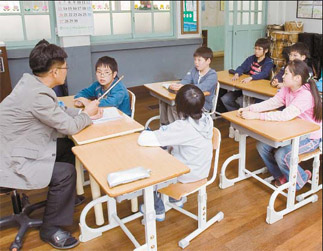 Students at Deogok Elementrary School in Gyeonggi suffer less stress because they are closer to nature, teachers say.

In South Korea, it is common for students to start preparing for selective high schools such as foreign language high schools when they are still in elementary school.
These high schools are usually highly successful at getting their pupils into top colleges.
When teachers at school and the cram school both recommended that her son be tested for a learning disability, Jang decided to try something different. She thought the all-out pressure at school was getting her son down. He was suffering from a skin disease and when he came home from school he had headaches.
“After spending a half-year in the countryside he became much more confident. He was told he had a very good eye for observing nature,” says Jang.
Upon returning from his studies at Sanchon, her son yearned to go back to his friends in the countryside, but his mother says her son has adjusted back to his original school in Seoul.
He keeps in touch with his North Jeolla friends over the phone.
Most of the rural programs are for elementary school students. They offer six to 12 month programs. The schedule is as tight as a typical city student’s day. Students rise at 7 a.m. and study until 3 p.m. 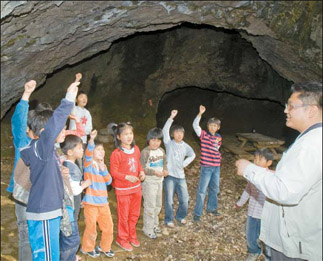 City students enrolled in a special program at Handemy Village in North Chungcheong learn about caves. By Shin Dong-yeun

But what happens after school is what sets these programs apart. Kids spend their free time roaming the hills and nearby valleys, cycling or playing baseball. Instead of watching TV or playing computer games, they explore caves, study insects and play music outside.
Rather than pizza and hamburgers, they eat fire-grilled potatoes and greens.
Of course, if a child fails to adjust to the new life, he or she is allowed to go home.
But most stay, finding even a full year too short, according to staff at the school.
There are special summer camps that last from two weeks to two months, plus alternative schools that are not recognized by the educational system.
However, these special programs differ as enrolled students from the city take the same number of class hours as pupils at their home school.
The programs work for many kids. They ease the pressure and kids are encouraged to experiment and interact with their natural surroundings.
But teachers advise parents to closely monitor their children in order to judge whether a break from city life is working or not.
“When a kid is sent here against his will just because his or her parents want to try something new and different, the whole venture can backfire,” warns Kim Yong-taek, a teacher at Duckchi Elementary School in North Jeolla.
Kim established a special program for city students in 2006.
Ko Hyeon-gu — Jun-ho and Chan-ho’s father — says he went to the school every Saturday when he was not busy at work and telephoned his sons whenever possible.
“If they needed something, such as in-line skates, I made sure they got them quickly,” says Ko.
Kim Dong-ju, an official at Handemy village, says abrupt changes can stress children and warns that parents have to be aware that any disruption might be counterproductive.

“We allow parents to send stuff here as long as those things don’t interfere with their new routine in rural areas,” he says.
School staff recommend that parents first send their children for a short program during school vacations before deciding on sending their kids for an entire term.
School officials say kids and parents who show the most interest in the rural programs tend to come from Seoul and other urban areas well known for fierce competition in educational matters.

Kim Yong-taek of Duckchi Elementary School was the first person to establish a specialized program in North Jeolla for city elementary school students to experience rural life.
Experts say 180 provincial governments in Japan run similar programs designed to revive the finances of rural areas. In the case of Duckchi Elementary School, the enrolled students’ mothers mostly live with their children in homestays, but in the Handemy Village program, children live with the village head’s family.
Here, the cost is about 500,000 won ($479) per month, which includes laundry and meals.
A lump-sum is paid at the beginning of a program. In the case of Gosan Sanchon Center in North Jeolla, this payment amounts to 1 million won.
Apart from long-term programs that last an entire semester and can be as long as a whole year, places such as Yangyang in Gangwon offer short-term programs during elementary school vacations.