The truth is out there, so is the new movie

The truth is out there, so is the new movie 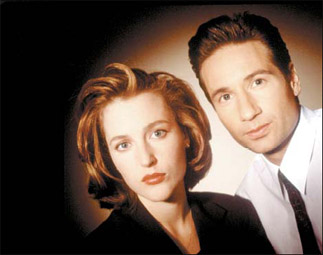 VANCOUVER — The truth is out there: Alien secrets will be soon revealed.
Six years after the popular sci-fi television series “The X-Files” ended, writer-director Chris Carter is back with a new film, “The X-Files: I Want to Believe.”
This means popular characters agents Dana Scully (Gillian Anderson) and Fox Mulder (David Duchovny) are back to investigate more unsolved mysteries.
The film, which was shot in Vancouver, is set for a July release in the United States.
Korean theatergoers will have to wait until September.
The long-running American television series, which first aired in 1993, centered on alien kidnappings and government conspiracies to coverup supernatural phenomena.
The upcoming film however, promises something different.
For starters, new characters will appear in the film, so those who were not original fans of the show can follow the story more easily.
“The film will be independent from the television series,” Duchovny said.
Compared to the first film, “The X-Files: Fight the Future” (1998), which was a compilation of two seasons’ episodes, “the second feature will be new.”
The heart of The X-Files, however, remains the same: the quest for truth.
For example, Mulder continues to search for the truth that somebody else wants to hide.
“He speaks for truth against authority,” Duchovny said.
The film is an action-thriller with intense characters, like those in “The Silence of the Lambs” (1991), according to the actor.
But even though the truth is ready to be revealed, the film’s production process is being kept hush-hush — much like the mysterious files in the series.
The producers are taking secrecy to an extreme, the cast and crew is muzzling the press and the only copies of the script have been locked up in the production company’s safe. 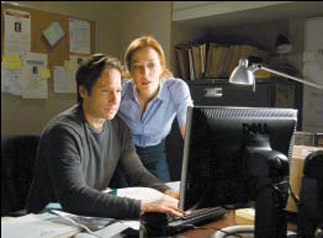 Even for the actors, the script’s accessibility was unusually restrictive.
“At first, I read the script on Carter’s personal computer,” said Anderson, who continued the mystery by refusing to give away further details.
“All I can say is that the film is surrealistic and queer,” she said.
The film’s director defended the secrecy.
“It is a mystery film. If the mystery leaks out, so does the film’s thrill and entertainment,” Carter said.
He can assure us, though, that the film will not simply appeal to X-philes’ nostalgia for the past series.
Instead, there will be new emotional exchanges, which Duchovny has long been looking for. The actor quit as Mulder during the series’ last season in 2002. “I was severely tired,” Duchovny explained.
He said he had been filming 10 full months a year for five to six years.
At the time he had wanted to free himself from The X-Files.
Duchovny, however, agreed to star in the film because unlike the demanding schedule of shooting back-to-back episodes for the TV series, the shoot took just three months to complete.
“If I were offered the chance to appear in the [TV] series, I would have turned it down,” he said.
Reprising his role as Mulder, however, was quite tough.
“So many years have passed since Mulder first appeared on television, but viewers long to see the same old Mulder,” Duchovny said.
The actor said that it was his job to break from convention and depict the character in a new light.
Regardless, Mulder still remains the obsessive-compulsive character audiences know well, according to Duchovny.
“The character ceaselessly investigates and researches for truth,” he said.
In the series and the film, Mulder believes in the existence of aliens. Scully, the other FBI agent, however is skeptical.
And in real life?
“I would be surprised if we [humans] were the only living ones in the universe,” Duchovny said.