Abide by this guide when you imbibe

Abide by this guide when you imbibe 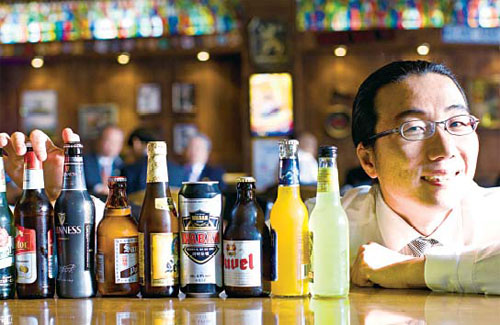 Lee Hyo-bok with international beers at one of his Seoul WaBar branches. By Kwon Hyuck-jae

They come to WaBar from all over the world: Japan, the Philippines, Spain, the United States and even North Korea.
No, we don’t mean the patrons, but the international beers of Lee Hyo-bok’s chain of bars. They number around 100 and hail from far and wide.
Lee bases his beer selections on his personal tastes and recommendations from friends.
With his affection for beer, Lee opened his first WaBar in downtown Seoul in 2000. After eight years, the chain now includes 246 franchises.
Lee, who enjoys a bottle of beer every night, has a few tips on how to enjoy your favorite brew in the comfort of your own living room.
First, beer tastes better when it’s stored in a kimchi refrigerator at 3 to 4 degrees Celsius (37.4 to 39 Fahrenheit) rather than in a regular refrigerator. Lee says people usually crave an ice-cold beer. But he says when a beer is too cold, it dulls the drinker’s sense of taste.
Beer tastes best, he added, when it’s at a temperature of 4 to 8 degrees Celsius in the summer and 8 to 12 degrees Celsius in winter.
Second, Lee says, drink beer out of the glass, not straight out of the bottle or can. Lee says the act of pouring beer into a glass releases the ideal amount of carbon dioxide, giving the drink a better flavor. But when pouring a beer, Lee noted, make sure the glass is dry. Even a few drops of water can prevent the beer from perfectly foaming.
Third, when pouring beer into a glass, rather than using one long pour, start and stop several times. As a bottle is emptied in several pours, it forms a head. The foam atop a beer, Lee says, is like a shield that protects its flavor.
Foam forms for two reasons. The first is due to the beer’s carbonation. The impact of the beer hitting the wall of the glass creates the second type of foam.
Because the second type of foam quickly dissipates, it’s important to empty a bottle in several pours rather than just one. This will help increase the amount of naturally occurring foam. A frosted glass helps to create a better head of beer, Lee said.
Fourth, Lee advises that to fully enjoy a beer, drink it by the mouthful, not in dainty little sips. Beer is at its best when the cool brew flows rapidly down one’s throat.
Finally, when a beer fan is impatient to crack open his brewski, Lee advises him or her to sprinkle water on the bottle and put it in the freezer or refrigerator for a quick chill.
But even if one abides by these rules, Lee says there’s one factor that truly affects taste.
The key isn’t the type of grain used or the brewing method; it’s the company one keeps.
“Beer is a beverage you drink when you feel good,” Lee says. “It tastes best with good friends close to you. Beer just doesn’t taste as good when you drink alone.”