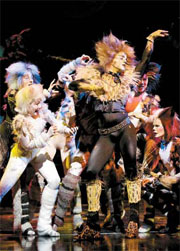 Rum Tum Tugger gets pawed by his feline friends in “Cats.” Provided by Seol and Company

The Broadway team that performed “Cats” at the National Theater of Korea in 2007 is in town to perform the musical again.
It is the musical team’s fourth visit to Seoul. Their first visit was in 1994, its second in 2003 and its third last year.
From Sept. 17 this year, the musical will be performed entirely in Korean by a Korean cast on the same stage.
This will be the first time the musical is performed in Korean since Cats was introduced here 15 years ago.
The Korean version will run until Feb. 1 next year.
There are only slight changes in the performance since last year, according to Seol and Company, the organizers of the musical.
“The stage will be pretty much the same as the audiences saw last year,” said Ahn Ji-young from Seol and Company.
However, there are changes within the cast.
Ranjeet Starr, who performed as Munkustrap last year, is now playing a bigger role as Rum Tum Tugger.
The cat drives the felines crazy with his sexual appeal.
Starr, who majored in classical ballet, has performed in musicals such as “Camelot” and “Fiddler on the Roof.”
Hayden Tee, from New Zealand, will play Gus, an old theater cat who reminisces about when he was in his prime and applauded for playing Growltiger.
Tee has previously been in “Les Miserables,” and the musical version of “Titanic.”
Mark Hamgannon performed as Mungojerrie last year. This time, he will be playing Skimbleshanks, the railway cat who makes sure everything is on time with a perky tune.
The rest of the cast will be playing the same roles they did last year.
ojlee82@joongang.co.kr

Andrew Lloyd Webber’s “Cats” will be staged at the Lotte Charlotte Theater in Seoul from May 30 to Aug. 31.
Lotte World Hotel in Jamsil, southern Seoul, is offering a special package, including two Cats tickets and an overnight stay in one of the deluxe rooms at the hotel for 299,000 won ($285).
Tickets for the musical range from 40,000 won to 140,000 won.
The show is staged at 8 p.m. every night, except for Saturdays, when there is an additional 3 p.m. matinee.
On Sundays and holidays the show is performed at 2 and 7 p.m.
For more information visit www.seolcompany.com or call (02) 411-5011.