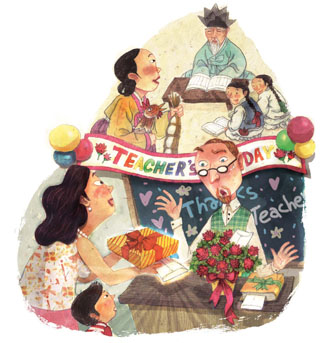 At this time every year, Ahn Hee-kyung, a mother of a 12-year-old, is faced with a dilemma.
It’s Teacher’s Day today and Ahn feels she is obliged to express her gratitude to her child’s homeroom teacher.
But she asks herself: How?
Last year, she visited the school with a 100,000 won ($95.60) gift certificate. A few days later, however, the envelope was sent back to her.
“I was so embarrassed,” the mother said, blushing. “It wasn’t a form of bribery, or chonji, just a way of saying thanks.”
Chonji means “a token of goodwill” in Korean, and doesn’t connote anything illegal. The practice of giving teachers gifts is thought to date back to the Goryeo (918-1392) and Joseon (1392-1910) Dynasties.
The government didn’t pay salaries to teachers at seodang, a private Confucian academy, and staff depended on students for their livelihood.
“Reciprocation [as a form of compensation] is an important Confucian value,” said Ko Jin-gwang, the co-president of Haksamo, a parents’ organization working to improve education in Korea.
“Back then, however, compensation or gratitude wasn’t in the form of money or expensive gifts. It was from the heart,” Ko, 54, said, based on his educational research.
Most parents gave the teachers chickens, potatoes or a basket full of eggs.
But the tradition began to change in the early 1970s as Korea became a richer society. Money became the dominant form of chonji and today the practice is associated more with white envelopes filled with cash.
Ko said the meaning of chonji has been subverted by cash gifts, since the amounts have gotten larger over time, putting parents under pressure.
“Some teachers take chonji for granted,” Ko said.
According to a survey jointly run by Sisa Press, a weekly newsmagazine and Bumo 2, a parents’ portal site, 36.7 percent of 547 parents surveyed said they gave teachers chonji, most commonly on Teacher’s Day.
The reasons parents continue this practice are straightforward. More than 80 percent of the parents in the study believe a teacher will pay more attention to a child whose parents gave chonji. Also, they do it because other parents do it.
“Today, parents, especially mothers, see which way the wind blows,” Ahn said. “There is a tendency to think that children whose parents don’t give chonji will be disadvantaged.”
Chonji is widely practiced, Ahn believes, and its significance goes beyond a simple expression of gratitude.
“Giving or not giving chonji may encourage some teachers to discriminate against students,” she said.
The practice of giving chonji is legal — if the amount is less than 30,000 won. Any amount over that is against the law, though few parents would give less than this figure.
Two years ago, lawmakers proposed legislation that would root out all forms of giving and receiving gifts in schools.
The proposal said that parents and teachers involved in a chonji transaction should each be slapped with a fine worth 50 times the amount of chonji given. If a mom was caught handing over 50,000 won to a teacher, she and the teacher would have to pay a penalty of 250,000 won each.
Under the proposed legislation, the children of parents caught giving chonji would be punished, too. They would be excluded from some school competitions and prizes.
However, the legislation was never passed because of opposition from parents’ groups, students, teachers and other lawmakers.
However, some action has been taken to curb the practice of chonji.
In 2006, the government encouraged schools to close on Teacher’s Day, and 70 percent did so.
Kim Hyo-jeong, 29, a teacher at Jeongneung Elementary School in Seongbuk, northern Seoul, said she was disappointed that teachers were all tarred with the same brush and seen as wrongdoers.
Some parents groups suggested an alternative. They said Teacher’s Day could be moved to February when the semester ends. The theory was that there would be less chances that chonji would affect students because the term was already over.
There was even the suggestion that the government abolish Teacher’s Day altogether.
Neither suggestion was taken up.
The situation remains unclear. Last month, the Ministry of Education, Science and Technology proposed legislation that would allow individual schools to draw up their own response to the chonji issue.
This year there has been a lot of effort to revive the original spirit of Teacher’s Day.
Kim Dong-seok of the Korean Federation of Teacher’s Association said he and the association encouraged schools not to close, as they did two years ago.
“The day should be spent honorably,” Kim said.
In fact, the number of schools going on holiday this year has dramatically decreased compared to 2006. According to the Seoul Metropolitan Office of Education, only 8.8 percent of 1,242 elementary, middle and high schools in Seoul decided to close its doors to prevent burdening parents and teachers.
Other solutions to the problem have been suggested.
“If teachers receive chonji, they should donate [the money] to the school for educational development purposes,” Ko said. 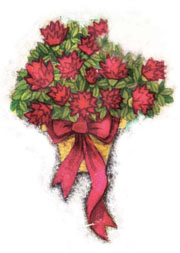 The problem, however, is that the process isn’t transparent and some teachers will hide what they are given, he said.
For several years, Haksamo encouraged parents to give teachers concert tickets or books instead of cash in envelopes. The committee also asked parents to write e-mails to teachers to thank them.
Cho Jeon-hyeok, a professor at Incheon University, supports movements to rid schools of chonji.
“We want to change the Korean education system. It is currently centered around teachers, but we want it to be centered around students and parents,” Cho explained. He questions whether Teacher’s Day is even necessary.
“You don’t have ‘Fisherman’s Day’ or ‘Farmer’s Day’ though you eat fish and vegetables at meals,” the professor said.
Kim, the elementary school teacher, isn’t concerned about the future, though.
“The trend is changing,” she said. “Teachers, especially the younger generation, no longer expect to receive chonji,” Kim said.
This year, her school wrote to parents asking them not to bring any gifts to school today. She told her students that if they want to thank her, they can only bring a letter of appreciation or folded paper flowers.
“A bouquet of real flowers costs money, which is a burden on parents,” Kim said.
During Teacher’s Day week, inspectors from the education ministry conduct strict tours of schools.
“During government inspections last year, if there was a shopping bag on a desk, the inspector opened it and asked what was inside,” Kim said, adding that money should never be a part of the teacher-student relationship.
“If I wanted to earn a lot of money, I wouldn’t have become a teacher,” she said.

The story of Teacher’s Day

Teacher’s Day dates back to May 8, 1958, when the Junior Red Cross started visiting sick or retired teachers.
JRC member Yoon Seok-ran, then a 17-year-old student at Kanggyong High School, South Chungcheong, is thought to have started the movement.
In 1963, the government set aside a day to honor teachers, and two years later, the students’ union in Korea decided to mark May 15 as Teacher’s Day.
May 15 is also the birthday of King Sejong, the creator of Hangul, the Korean alphabet.
Up to 13,000 JRC members went to school early in the morning with roses and wrote notes saying, “Teacher’s Day, Thank you.”
They also voluntarily cleaned the school premises and shined the teachers’ shoes.
The government abolished the May 15 celebration in 1973, but it was revived in 1982, when it was officially named Teacher’s Day.