[DVD Review]Comedy spices up colonial past

[DVD Review]Comedy spices up colonial past 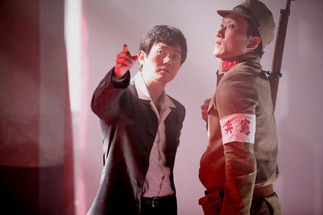 For many Koreans, the Japanese colonial period (1910-1945) is remembered as one of the bleakest, most devastating times in history. Films about this era usually portray historical events that remind viewers of Korea’s tragic past as a subordinate country.
“Once Upon a Time” dates to 1940s Korea under Japanese reign, but interestingly, it takes a rather humorous and easygoing tone.
The story begins as the Japanese governor-general orders a search for the legendary 20-carat diamond called the Holy Light of the East. The diamond has been placed in the forehead of the Great Buddha in Sukkuram Grotto to shine at sunrise.
Park Yong-woo stars as a shallow yet attractive master thief, Bong-gu, who will steal and sell any kind of Korean treasure to a pawnbroker to make dirty money. He is also interested in acquiring the diamond for himself.
Bong-gu’s plan, however, is foiled when another secretive thief, who calls herself “Haedang hwa,” or Rugosa Rose, jumps into the game to steal the diamond as well.
The film shows enough of the social background of the time, with the Japanese taking bundles of Korean gold and randomly picking on pedestrians. Every Korean in the film has switched to a Japanese name in order to survive.
Indeed, some parts will trigger viewer emotions and patriotism, such as scenes in which innocent citizens are killed by angry Japanese soldiers looking for the diamond. The serious moments, however, don’t last throughout the entire film.
Life under Japanese colonialism is desperate, but each person has to live their life, and life provides some humor even in the depths of despair. Once Upon a Time can be a comedy that viewers can sit back on a comfy couch and laugh at because it focuses on personal journeys, not just historical events.
In the end, the story reveals that the Holy Light of the East never existed in the first place. It is Bong-gu’s win-win plan to redeem Korea’s stolen gold from Japan with a fake diamond as bait.
Funny from beginning to end, Once Upon a Time has a delightful finish, and Bong-gu continues looking for the next target he can make big money from.
It is not different from other comedies, expect that it takes place during a desperate time that many associate with strong emotion.
For me, it was an interesting DVD choice that kept me entertained — although I frowned at some points — with Park’s comedy.