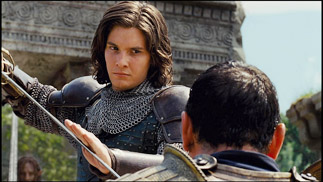 Soldiers clad in ghoulish “300”-style silver masks clash swords. A little girl nearly gets mauled by a bear. A whole battalion of centaurs, dwarves and talking animals gets blotted out by an onslaught of adult-propelled crossbows.
And yet, during my viewing of “The Chronicles of Narnia: Prince Caspian,” not a single child in the audience let out as much as a whimper.
Quite the surprise, as many of the frightening scenes (including some of the aforementioned) in this second film installment of C.S. Lewis’ beloved children’s series take place in dank, dark castles. In the United States, this film, as well as its fabulous, Oscar-winning prequel, is rated PG, yet it’s open to all here. Perhaps Korean kids aren’t scaredy-cats like their American counterparts — or maybe their endless video-game violence has succeeded in desensitizing them.
In the vein of the similarly dark, spooky and kid-oriented Harry Potter and “Lord of the Rings” series, Narnia also takes up more than enough screen time. It’s a wonder the kids weren’t getting ants in their pants by the time the film passed the two-hour mark.
But for grown-up Narnia nerds like me, Prince Caspian is a wonderful screen adaptation of the fantastical novel. The soaring, triumphant score by Harry Gregson-Williams complements the sweeping cinematography and action gorgeously, and in the film’s daylight scenes, primeval nature has never looked more inviting.
Narnia newcomer Ben Barnes plays an excellent (and extremely handsome) Prince Caspian opposite the perfectly cast Pevensie children of “The Lion, The Witch and The Wardrobe.” Caspian summons the Pevensies from their grim wartime London reality as his sinister uncle Miraz conspires to steal the crown, only to learn that his rescuers are mere kids.
Georgie Henley as Lucy Pevensie, the youngest, stole my heart in the first film, and she does it again despite losing some baby-faced cuteness. There’s a reason why Aslan, the elusive lion king of Narnia, chooses Lucy as his favorite; it’s the same reason why the audience loves her, too.
Lucy, in all her unabashed, steadfast belief in Aslan’s power and Narnia’s magic, embodies the appeal of the series.
“I wish you’d all stop acting like grown-ups!” Lucy exclaims when her older siblings doubt her sighting of Aslan. The scene is only improved by a quip from their dwarf companion Trumpkin: “I am a grown-up.”
But in Narnia, acting like a grown-up leads to failure, as demonstrated in Peter Pevensie’s ill-fated initial military attack against Miraz.
Narnia is at its best in its lighter moments, when it soars above its serious subject matter to embrace the charming details that made the series into a classic. Prince Caspian in book form is practically a catalogue of clever names, but the film treats Lewis’ nomenclature as an afterthought. I could have done with a few more references to Trumpkin, Reepicheep and Trufflehunter by name, and a lot less epic battle.
Nevertheless, the film is a hauntingly beautiful escape into “a dreamworld of magic,” as the famous “Saturday Night Live” Narnia rap goes. I just think it’s a shame it caters so much to adults.