The Great Wall of Korea

The Great Wall of Korea 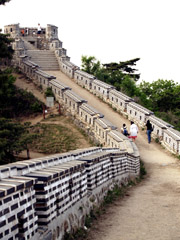 A stretch of the fortified wall of Namhan Mountain Fortress. Photos by Photos Brian Breuhaus

We never planned to go to the Namhan Mountain Fortress. We went there, in fact, only out of naivety or stubbornness. Or both.
Despite numerous warnings from our native friends who know better, our family and some friends decided to drive to Gangnam Province for some shopping and hanwoo beef. On a Saturday on a perfect day in May. At 2 in the afternoon. On a three-day weekend capped by Children’s Day.
It took about 30 seconds for us to get buried in traffic. Two hours and 20 minutes later, we were still outside the East Seoul tollgate. That’s right, still in Seoul.
Of course, the coolant in our car needed a refill, so we had no air-conditioning. Sweat rolled down our 17-month-old baby’s face and our 3-year-old, up from a nap, had a question: Were we there yet? Were we there yet? Were we there yet?
We called our friends who were leading the way to Gangnam and cried “Abort!”
Fortunately, we were moments away from green trees, fresh air and a beautiful spot that can be said is a nice little alternative to the Great Wall of China.
Our friends knew the way to the place called Namhansanseong, which I have to look up every time I say it. I’ve now said the word probably 10 times and I still can’t remember it. A better way to remember it is Korea’s version of the Great Wall. 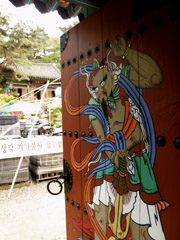 A detail from a door near-at a nearby temple.

The mountain was the first exit past the East Seoul tollgate, on Highway 35 right past where it splits with Highway 37. Make the first right, then follow the signs.
On the way up, we stopped at a farmer’s market. I love these markets in Korea, because everyone is always so friendly. I took pictures of a group of ajumma and ajeossi drinking soju, eating bananas and selling produce. They were having a ball and insisted that I give them a copy of the pictures the next time I come. Which I plan to do.
Anyway, we snagged a bag of potatoes for 5,000 won ($4.79), which is half the price of Costco, and pointed our cars north toward the top. As we steered up the mountain, the path narrowed to the width of one car and then about a foot, or so it seemed. But our friend, a diplomat for an Asian country and an avid driver around Korea, knew the way. We passed hiker after hiker before finally stopping at the top, right below a picturesque Buddhist temple, decked out in full colored-lantern splendor for the prophet’s birthday. 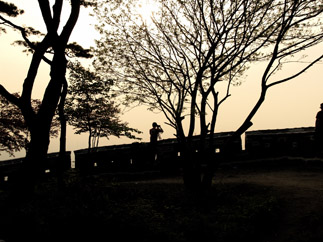 A photographer snaps the view from the parapet.

We hoofed it the rest of the way. My wife rarely wears heels, but she did this day — to go shopping. Fortunately for her, the hike was short. After a stop to taste the spring water, we were at the top within 10 minutes — even dragging along our little ones and our friend’s 3-year-old.
Suddenly, the entire city of Seoul lay before our eyes. The skies were hazy this day (probably due to all the traffic), but the view was still impressive as the sun slid down in the sky toward the horizon. We could see past the Han River. The walls, too, were a sight to see. We saw the Great Wall in China last year. That was more impressive, of course, but this is nice to see too, at 1/1000th the hype. Like the Great Wall, the ancient brick walls undulate into the distant horizon.
A little bit of history is in order here. The fortress was constructed in 672 to protect the Silla Dynasty from Tang China. Some of that still exists, but most of the walls were built during the Joseon Dynasty, starting in 1624. During the second Manchu invasion of Korea, in 1636, Korea’s King Injo was not able to take refuge at Ganghwa Island, where kings normally fled. 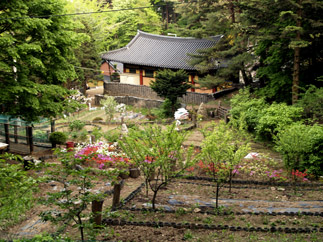 A traditional Korean building near the fortress walls.

Instead, he and more than 13,000 troops went to Namhan Mountain (and Namhansanseong, which means Namhan Mountain Fortress). The Manchus couldn’t reach the well-protected site, but after 47 days of siege, the food and water ran out. King Injo was forced to sign a peace treaty. The whole episode is the subject of a recent bestselling novel by Kim Hoon.
In addition, the gray brick parapets date back to 1778. The whole place was restored in 1954, when it was named a national park.
Anyway, back to our story. We played around on the wall for a while, then headed back down. I split off for a quick stop in the temple. Candles were lit and a monk quietly worked in the garden as I breathed in the incense. It was so peaceful and serene.
Then my wife started calling, “Brrriiiiiiaaaaannnnnn.” Turns out, the gates closed at 7 p.m. It was 6:55. Although my son wanted us to go “really, really, really, really fast,” we eased down the mountain at a nominal pace. 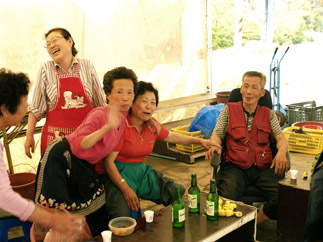 Locals drink soju and eat snacks on the route up to the temple and the fortress.

In the nearby town of Sanseong, dozens of restaurants sit in a cluster. The smell of roasted duck on the grill finally pulled us in. Along with panchan (a kind of pancake) full of mountain herbs, the meal was fantastic.
As we headed back, the skies had cleared and we could see a nighttime view of the capital through the trees.
Like the haze, the traffic had cleared, too. We were back home in downtown Seoul in less than an hour.
Namhan Mountain Fortress is about a 20-minute walk from Namhansanseong subway station on line No. 8. You can also take city bus No. 9. from Sanseong Station on line No. 8, exit 2.