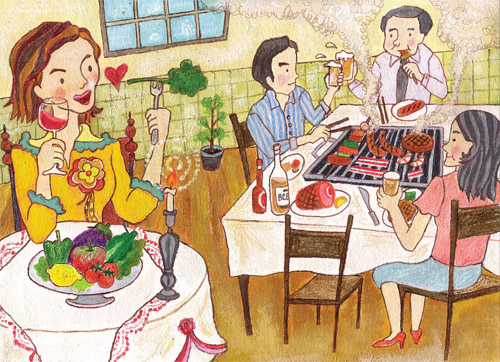 Lee Won-bok, a devoted vegan for 20 years, recently had the chance to ask a friend who had quit smoking and become a vegetarian which was harder: quitting smoking or meat.
The answer came without hesitation. Lee’s friend said forgoing meat was a lot harder in Korea. People complimented him when he quit smoking, but when he said he had become a vegetarian, many attacked his “peculiar” behavior.
“It takes some social skills when you commit yourself to vegetarianism here,” says Lee, who runs an online vegetarian community site called the Korean Vegetarian Association. “Koreans tend to order the same food and eat together, and if you’re not one of ‘us,’ you’re treated as a stranger.”
This kind of conformity, he says, keeps many vegetarians from openly admitting their dietary choice.
Despite the lack of emotional support from friends and family, interest in vegetarianism has soared in the past few weeks over fears concerning mad cow disease.
An outpouring of anger followed stories in the local media two weeks ago that the government had agreed to import U.S. beef from cattle that was over 30 months old at the time of slaughter. Many scientists say older cows carry a greater risk of mad cow disease than younger ones.
Meat-eaters’ concern was fueled recently when avian flu hit hundreds of local poultry farms. Millions of live chickens were shoved into rice sacks and buried underground. 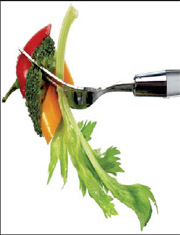 Within days, a string of media reports were alerting the public about diseases you can catch from eating meat.
Lee says his Web site saw twice as many hits as usual during the past few days from people curious about vegetarianism.
In a vegetarian buffet restaurant in a quiet office area in northern Seoul last Saturday, an unusually large crowd swarmed in at lunch time. The eaters cleared away most of the food by early afternoon.
“I used to eat meat three times a day,” says Lee Jong-hwan, a jewelry shopowner, who says he came to Brown Rice Health Buffet Restaurant after reading “Skinny Bitch,” a book by Rory Freedman and Kim Barnouin about veganism that was recently translated into Korean.
“For the past week, I didn’t go near animal flesh, and I lost 6 kilos [13.2 pounds],” Lee says.
The trestle table was laden with vegetarian dishes, including vegetable wraps, acorn jelly salad, seasoned lotus roots, homemade tofu and spicy stir-fried rice cakes made with brown rice.
It’s only recently, though, that the place has caught the attention of many Koreans.
The restaurant, which opened 13 years ago, is run by a woman who claims she cured her diabetes by going on a vegetarian diet. But until last month, most customers were people recovering from cancer.
Then the furor over mad cow erupted and the majority of customers, who are now mainly office workers in the neighborhood, grew by a third.
No official survey has been conducted on the state of vegetarianism in Korea, according to the Ministry of Health, Welfare, and Family Affairs but Lee expects the number of vegetarians in Korea to be low — less than 1 percent of the population.
That would mean there are approximately 480,000 people in Korea who don’t eat meat, or about 1 in every 100 people here. But so far, Lee has not met any vegetarians here besides the people he met through his Web site.
In contrast, 7 percent of Americans said they never ate meat, according to a national poll conducted by Harris Interactive in 2006.
National meat consumption in Korea has risen steadily for the past few decades, according to the Korea Rural Economic Institute, a government agency that sets policies on livestock and agriculture.
In 1960, on average, Koreans consumed 500 grams of beef a year, 700 grams of chicken and 2.3 kilograms of pork. The figure jumped to 8.5 kilograms of beef, 8.9 kilograms of chicken 16.5 kilograms of pork and in 2000.
For years, people chose a vegetarian diet for medical or spiritual reasons. Voluntary vegetarians like Lee who quit eating meat while in college to lead a “cruelty-free life” are extremely rare. 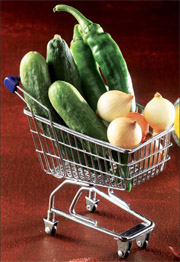 The exception was the vegetarian fad here during the early 1990s that was driven by a medical doctor called Sang Lee of the Adventist Church.
Lee, a nutritionist at the California-based Weimar Institute of Health and Education, began the “New Start” movement, whose name took initials from nutrition, exercise, water, sunlight, temperance, air, rest and trust in God, its principles for a healthy life.
Lee argued that a lack of these elements in the body damaged genes and could lead to cancer and other diseases.
His message that “meat equals poison” was a phenomenal hit with mainstream Korean society. Many butchers were forced to close, but the craze lasted only about a year.
Some people think the movement failed because a majority of the followers didn’t understand the ethical ideals of vegetarianism and wanted quick-fix health benefits. The nature of Korean food, which includes a lot of meat-based stews and sauces, also narrowed the options in restaurants here.
But others say the difficulty of sticking to their dietary choice in Korea is hampered by the need for conformity.
“When eating in groups in Korea, there is no such thing as an individual’s preference even for non-vegetarians,” says Hwang Seong-su, a neurologist at Daegu Medical Center and an avid supporter of vegetarianism. “Often something’s got to go: you compromise your dietary lifestyle or you give up blending in with the corporate world.”
Kim Tae-eun agrees.
She quit her job as a public relations officer at a foreign semiconductor company six years ago when her health began to deteriorate. She was often fatigued and nauseated. A part of Kim’s job then was entertaining clients, and those evenings spent wining and dining at fancy restaurants involved eating meat. But she was a vegetarian.
“I couldn’t do both,” she says. “Let’s face it. The corporate culture here is built around the idea of bingeing on meat and soju. That’s how people settle important business deals and bond here. Korean companies grew over such a short period of time through those practices. But you can’t be a vegetarian and also be part of that environment.”
However, nutritionists say Korea has some advantages for vegetarians, if you are determined. The diet here is full of soybean-based food and vegetable side dishes. In a worst-case scenario, many vegetarians here say they simply order an extra bowl of rice and eat it with their side dishes without ordering a main dish.
“Meat eating is a modern trend in this country,” says Song Suk-ja, a retired food and nutrition professor at Sahmyook University in Seoul. “Traditionally, we only ate beef soup or chicken on holidays and at major celebrations like weddings. The basis of Korean food has always been vegetarian.”
Vegetarian communities are slowly expanding as well, it seems. The Seoul Vegetarian Club (seoulveggieclub.wordpress.com) holds regular meetings at restaurants that serve vegetarian food in the capital. The Web site includes the dates, times and directions.
Green Korea United, a civic environmental collective that published a vegetarian cookbook in 2005, arranges regular cooking classes. At each session participants try their hand at new vegetarian dishes like homemade tofu or peanut rice cake in the office kitchen and eat together.
The idea is to make your own food, spend less energy and minimize waste.
“The problem of having to eat meat occurs more frequently when you are dining out,” says Mun Eun-jeong, who organizes the classes. “You are more likely to look for a delicacy when you are dining out, which often involves a lot of unnecessary ingredients. It’s best to prepare your own food at home.”