The business of death

The business of death 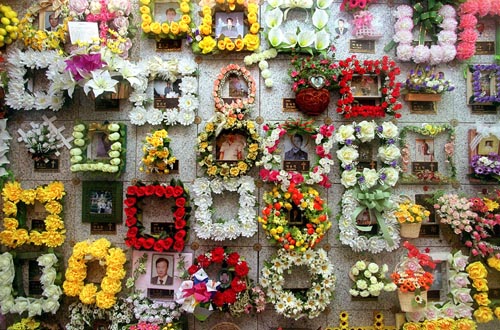 It’s the circle of life.
Every day there are people celebrating new beginnings while others are in mourning.
A total of 243,934 people passed away in 2006 in Korea, according to the nation’s statistics bureau data. That’s 668 deaths a day.
Korea is set to become one of the most aged societies in the world, so the industry of the “great beyond” is unlikely to go out of business anytime soon.
The death sector experienced an unprecedented boom in 2006, which was considered an auspicious year, according to the solar calendar.
Businesses introduced 40 million won ($38,204) in luxury shrouds and niches in columbaria, storage sites for cinerary urns, for 100 million won. There was also a tenfold increase in the number of families moving their ancestors’ graves to more favorable sites

Although there is no official data, experts say the death industry here is worth around 3.5 trillion won a year. That figure is based on the number of deaths multiplied by the cost of funerals and body disposal.
The Korea Consumer Agency says families spend an average of 16.5 million on giving a relative a decent send- off. The cost is reduced to 12 million if the body is cremated.
Besides lower costs, rising land expense for graves is triggering more Koreans to opt for cremation.
In 1955, cremations accounted for only 5.8 percent of funerals. That figure now stands at 52.6 percent. The reasons for the increase vary. Last year, a survey of 1,005 people by the Korea Institute for Health and Social Affairs said 41 percent of respondents think cremation is simpler, 38 percent say it saves land and 3 percent cite costs.
The growing popularity of cremation is a global trend. The Cremation Association of North America, which comprises over 1,200 undertakers, cremationists and funeral directors, says the number of cremations in the United States rose to 33.5 percent in 2006 from 27 percent in 2001. The group expects cremations to overtake burials by 2025.

The problem for Koreans wanting a cremation is the shortage of crematoria.
“It usually takes more than five years to persuade residents to allow a crematorium to be built in their neighborhood,” said Go Deok-gi, deputy director of Funeral Policy Task Force at the Ministry of Health, Welfare and Family Affairs. “Supply will never meet demand because people are very much against [living near] crematoria.”
Another trend here is the burgeoning popularity of natural burials. Since last year, the government has been working on guidelines for eco-friendly burial parks, such as gardens and arboretums. These options are now considered alternatives to conventional graveyards and columbaria.
There, people can pay their respects to loved ones in a green environment rather than among tombstones. They use wood instead of granite markers to identify plots.
The new regulations take effect on May 26.
A survey conducted by the Korea Institute for Health and Social Affairs last year said one of two Koreans want green burials. People don’t want to burden their family with the maintenance costs for burial sites and lack of land, the institute says.

The Ministry of Land, Transport and Maritime Affairs estimates that 1,007 square kilometers (100,700 hectares) is used for graveyards and columbaria in Korea. That’s approximately 1.5 times the size of Seoul.
In some Western countries, a green burial is associated with more than literally a green final resting place. It implies no cremation, no chemical embalming, no non-biodegradeable caskets and no grave liners or protective vaults. But the underlying concept is the same as in Korea: People increasingly want to leave a small footprint without changing the landscape.
According to the book “Grave Matters: A Journey Through the Modern Funeral Industry to a Natural Way of Burial” by Mark Harris, the green burial movement gathered steam in the West in the early 1990s. Baby boomers spearheaded the drive, bringing it to the mainstream, along with Earth Day and natural childbirth.
“People have begun to see graveyards as an ecosystem,” said Shin San-cheol, director general of National Council for Renewing Life in Korea.
“To create a cemetery, it is inevitable that people cut down trees and destroy the natural landscape. As people became more environmentally aware, the idea of departing in an environmentally friendly way is catching on.”