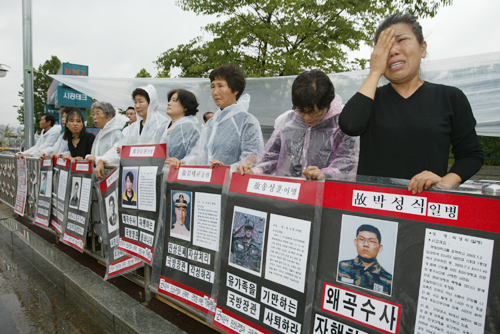 Parents of soldiers who have died in the military question the military s explanation for the deaths of their sons, in front of the Defense Ministry. [JoongAng Ilbo]

Private First Class Kim Dong-min was sentenced to death by a military court earlier this month. His case was clear-cut. In 2005, he went on a shooting spree and killed eight fellow soldiers. It was a classic case of someone who failed to adjust to military life and then just snapped.
Fatal shootings in South Korea are rare, as it is illegal to own a gun except for small caliber guns for hunting.
Whether Kim will be executed remains to be seen, as the country has moved slowly away from the death penalty. The last execution took place in 1997. Kim s victims were just statistics added to the total number of deaths in the military here.
Every year the South Korean military loses the equivalent of an entire company of soldiers.
The news is usually released quietly.
The death toll includes accidents or cases of apparent suicide which the military categorizes as deaths that occur due to lack of military discipline.
The bulk of this category comprises suicides. The rest are accidents involving weapons or acts of violence.
Last year, the military lost 121 men in noncombat-related activities. Considering that in 1993, 343 military personnel died, the military appears to be making an effort to address the problem.
Overall, better education, supervision and an improved command have resulted in fewer accidents and incidents, says Lieutenant Colonel Chun Byeong-gyu of the Defense Ministry.
Nevertheless, although the number of suicides has dropped, an average of 73 soldiers killed themselves each year in the past decade, and 80 committed suicide last year, according to the Defense Ministry.
But the military doesn t think these deaths were a direct consequence of military service.
In an analysis of deaths in the military, an internal report concluded that “the number of suicides in the military is relatively lower among civilian men in their 20s.” The report concluded that the overall death toll in the military will decrease but the number of suicides in civilian society could become an obstacle in reducing such numbers. It is hard to reverse a natural trend occurring in society, the report says. 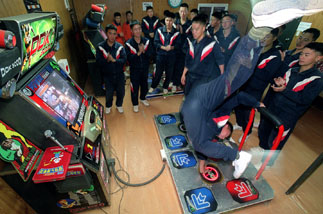 Bottom: The Defense Ministry has tried to improve conditions in the military by providing better leisure equipment. [JoongAng Ilbo]

Civic groups and parents who have lost sons in the military are suspicious of the military’s explanations for the deaths.
“Whether it’s a suicide or an accident, the closed nature of the military often makes any explanation a subject for scrutiny,” says Kim Deok-jin, an official of the Catholic Church here. Kim represents parents who have lost sons in the service. “The military police and the courts are internal organs of the military and they are regarded as official mouthpieces of the military rather than neutral organizations.”
The Presidential Commission on Suspicious Deaths in the Military recently announced that some past cases stamped by the military as simple accidents were murders or had other causes of death. This news has fueled parents’ suspicions. The committee said that investigations revealed five cases were covered up by the military.
Parents such as Ju Jong-woo now feel they have legitimate reasons to doubt explanations from the military, and they vow to maintain pressure on the military until they know the truth. “I want to know what really happened to my son,” says Ju, who was told by the military that his son killed himself in 2003. Ju has filed a petition with the presidential commission, arguing that his son had no reason to take his own life.
After decades of military rule that started in the 1960s with Park Chung Hee and continued with the regimes of Chun Doo Hwan and Roh Tae-woo, both former generals, South Korea’s first democratic government came to power only in 1993 with the election of former president Kim Young-sam. It was only in January 2006 that the Presidential Commission on Suspicious Deaths in the Military was launched. 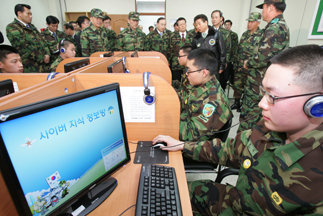 The ad hoc committee is scheduled to end its activities by the end of the year, but it has received more than 600 petitions to look into past closed cases. It has closed only 150, including rejections. Park Jong-deok, a senior official of the committee, says the committee can close another 150 cases by year’s end, leaving the rest unresolved. The length of investigations depends on the case, but officials say they need up to a year to investigate each case.
Twenty percent of the 105 investigators and support staff at the committee has a military background. The drawback is that only cases until December 2005 are under review. Organizations such as the National Human Rights Commission of Korea will handle the other cases that occurred after 2005, something experts say could be a nightmare for parents and relatives trying to find out what happened to their sons.
“Matters involving the military need to be investigated by experts who know how to find a road when they face military red tape,” Park warns. “Anybody else could be in for some unproductive digging.”
The committee will have to ask the National Assembly for an extension. Nevertheless, the Lee Myung-bak administration said earlier that it would close all ad hoc committees established during the Roh Moo-hyun administration as soon as possible, making the chance of an extension slim.
The most pressing issue, Park says, is to change the current framework that makes investigators and the prosecution part of the military and separate from similar civilian bodies. “We have to ensure the independence of military police investigations from the chain of command,” says Park. “Say you have a division commander who is looking to add another star but just saw one of his men get killed in a beating by others under his command. A possible promotion can be negatively affected and the temptation is there to influence the outcome of an investigation.” 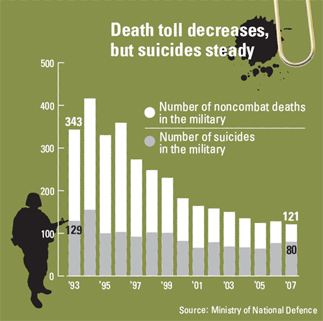 The official expressed frustration that a recent bill to make changes to the current military court and military laws didn’t get passed beyond the Defense Committee of the National Assembly, as lawmakers cited other more pressing issues to handle.
He adds that military investigations nowadays tend to be quicker in determining the cause of death compared to the past, an improvement he cites, but they often fail to dig deeper. “There could be various reasons for a suicide but the military often cites individual problems,” says the official.
Summing up its findings so far, the committee said the military tends to brand suicides as failures of adjustment on the part of the individual soldier in question, or external factors such as a girlfriend’s change of heart.
Publicly, the official line is that hazing and beatings have almost disappeared in the military except for a few isolated cases. Nevertheless, finding someone saying otherwise is not that hard. “We had beatings,” is the short answer given by Cho Seung-hyeon, who was discharged in April after serving as a drill instructor at the Army’s main boot camp in the Chungcheong provinces. During his two years of service, his unit had two suicides by soldiers.
“Beatings have decreased overall, that’s for sure, but can you say they do not exist? Depending on the type of unit, there are varying levels of beatings going on, but the impression we get is that riot police units nowadays practice them more,” says Park Jong-deok. Experts say that more than half the suicides occur at the private first class and second class level, the ranks most vulnerable to hazing by senior ranks.
While civic groups blame the military and the government for failing to address an issue that has persisted for decades, incidents such as Private Kim’s killing spree that caused public humiliation for the military have prompted the military to improve daily living conditions for the soldiers.

Kicking off a broad campaign the year after the Kim incident, the military has engaged in various projects that are expected to be finished by 2020. Old bathrooms and toilets have been renovated and commanders are routinely educated about how to foster better relations with their soldiers. In addition, psychiatrists meet with recruits at the initial medical checkup for the first time last year. Before that, draftees’ mental health was judged solely on written tests.
The government also introduced a law about the same time that forbids beatings and verbal abuse such as swearing. Each military unit is now required to have a professional counselor at hand in order to attend to difficulties and soldiers’ complaints. Some housing units have been renovated. They now feature beds at the squad level. In the past, whole squads were often cramped into a single room where soldiers slept on raised floors, cheek to cheek. In addition, a measure to reduce the total length of service to 18 months by 2014 is already taking effect.
Nevertheless, military officers admit it will take a long time for hazing practices and the hush-hush attitude in the military to disappear. “There are times when you suspect something went on, but unless someone comes forward, it’s hard to do anything,” says an Army captain speaking on condition of anonymity. “This is the military. Closing ranks is practiced from the bottom to the top.”
Now the presidential committee has asked the Defense Minister to rethink the death of a soldier who committed suicide in March 2007.
Investigators believe the suicide was caused partly by constant harassment and physical assault. If the military takes up the recommendation, the soldier in question can be buried at the National Cemetery.
What one college student had to say about the whole issue probably underlines the attitude of the men who have to leave the comforts of home and live a spartan life. Says Choi Hyeok-jae, 20, a college sophomore in Seoul, “There is this saying that if you die in the military it’s worth less than a dog’s death.”