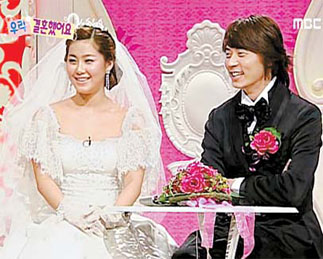 MBC-TV s reality show We Are Married features celeb couples who are not married. [MBC-TV]

Fact one: They are not married.

Fact two: They say We Are Married in a TV show.

Fact three: Viewers all know that it s a lie, but they are willing to be deceived.

This schizophrenic situation is the premise of one of the hottest TV shows in town: We Are Married on MBC-TV.

This time the idea has been taken one step further: Producers are hypothetically wedding the entertainers.

Welcome to the wonderland of We Are Married, a segment in the MBC-TV s Sunday, Sunday Night.

Viewers, producers and celebrities collaborate on the deception.

We all know it s make-believe, but we suspend reality to enjoy the show.

If you find it hard to buy the proceedings, you ll lose your ticket to enjoyment.

In return for deception, you get the voyeuristic fun of peeping into the lives of a newlywed celebrity couple.

There are four sets of couples on the show. They live together, decorate their bedrooms, cook for each other and have lovers tiffs.

Following the formula of American reality TV shows, each couple is later interviewed separately about their feelings for each other.

Next, the couples gather in a studio where they watch edited versions of their, and others , married lives.

The highlight of the show is the dissection and examination of each couple.

Producers obviously were careful in their selections, making sure they had included stereotypical couples-next-door.

The newly weds play a variety of roles.

There s the wife who badgers her husband for a new pair of shoes.

The husband who is lazy and bossy.

The wife who takes her husband to a beauty shop and forces him to dye his hair the same color as hers.

And the husband who cooks as a surprise to make his wife happy.

One partner is much older than the other. The guy? No, the woman.

This situation reflects a recent trend in Korea.

Older women are not afraid to hook up with younger men.

Viewers laugh and get angry, relating to these couples daily lives played out before the cameras.

And they believe that the singer who is acting the role of a kind husband is like that in reality.

It took me weeks to adapt to this virtual reality show.

I have to confess that this TV show was more an object of study than pure entertainment.

My questions was: Why are Koreans hailing this kind of virtual reality show, although we all know that it s faked?

Then a friend of mine who always jokes that he is an MBA, meaning Married But Available, gave a simple answer: The show is a manual of what people want to see from marriage.

This fixation, my MBA friend said, has led to the birth of this mutant TV show.

Indeed, come to think about it, marriage in the show looks pretty.

There are no scenes about the ugly side of married life.

The couples may fight but they soon reconcile.

Husbands and wives cook for each other and smile a lot.

They do not fight over who should be throwing out the smelly kitchen waste or who should vacuum the floor on Saturdays, because that s not what viewers want to see.

After all, there is no room for real reality in this show.