A world of fakes

A world of fakes 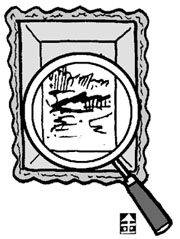 China’s People’s Artist Qi Baishi (1864-1957) signed his artworks with these words: “If we have eyes, we should tell the true value of works of art.” This is not all. On principle he refused to be photographed with people who bought his artwork. It was a safeguard against buyers who might use his photo increase the value of imitations at art exhibitions abroad. He was so careful because there are many forgeries of Asian works of art. This is because people can copy real works of art. They can make copies of original artworks and pass them off as genuine. As copying becomes easier, talented artists are capable of producing works that are not that different from originals. Many copies and fakes are made of the works of great artists. If we add the fakes generated for money, the number is astronomical.

The works of art at the Shanghai Museum in China are an example. It boasts more than 800,000 paintings, ceramics and bronze ware. But experts have appraised the works and only 120,000 are real cultural treasures. Some 700,000 are either suspected fakes or have been appraised as fakes. If museum collections are like this, imagine what private collections must have. Fakes probably outnumber genuine works of art everywhere, not only at the Shanghai Museum.

What then should we think of Joseon Dynasty drawings and works in that tradition? One case rings a bell. Korean tycoon Lee Hoi-rim donated 8,450 works of art worth tens of billions of won he had collected over 50 years, including drawings of Kim Hong-do and Jang Seung-up, to the city of Incheon. However, results of an appraisal have shown that half of the collection is not genuine.

Recently, Lee Dong-cheon, an expert in appraising drawings, has stirred a debate in the appraisal of ancient works of art in his book “The Secret of Appraising Real Works of Art” published by Dong-A. The book claims that Jeong-seon’s landscape, “Gyesangjeonggeodo” National Treasure No. 585 printed on the back of 1,000 won bills, and many other famous drawings of the Joseon Dynasty, are forgeries. Academic scholars and dealers in ancient works of art are turning their back on the claims, saying it is not worth considering. However, Lee was the top pupil of China’s famous appraiser of ancient works of art, Yang Renkai. He holds a doctorate in appraisal from the Beijing Central Academy of Fine Arts, the only state-run university of fine arts in China. Lee claims to be the only qualified Korean appraiser of ancient works of art. We would like to see experts address this issue. The debate about whether these are fakes may negatively affect the art market here. However, good medicine is meant to be bitter.