A piri and a pirouette in the hills

A piri and a pirouette in the hills 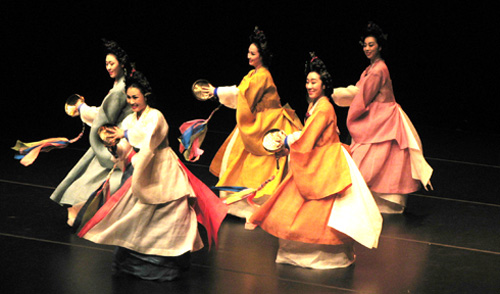 Dancers swirl around the stage at Seoul Namsan Gugakdang in a display of jinsoe, a traditional dance.

Mount Namsan in central Seoul used to be where seonbi, Korean classical scholars, would gather to thrash out ideas about history, philosophy and literature.
In their white jackets and trousers and topknots, they practised calligraphy, art and music on the green slopes here.
Although those days are long gone, and always more romantic when viewed through the lens of nostalgia, you can still capture a sense of the past among the trees here.
The Seoul Namsan Gugakdang, a traditional concert hall at the foot of Mount Namsan holds regular concerts featuring the piri, a Korean flute, and traditional court, folk and ritual dances.
The “Namsan Tour in Korean Music” program is a series of performances that began early this month featuring different facets of gugak, or Korean music.
Performances take place every Wednesday to Saturday through next month.
On Fridays, you can catch the “Piri, New Frontier” show that introduces people to the sound of the Korean traditional flute.
Organizers say this instrument has largely been forgotten and that this is a rare opportunity to see different performers show off their skills.
“The piri has played a pivotal role in Korea’s traditional music,” explained Yun Jung-kang, a music critic who planned and directed the performance.
“Kings used to listen to piri performances at the palace and commoners at the market. Its presence waned in the 20th century, but we hope to bring it back,” Yun said.
Yun, who has his own radio show on Gugak FM, says the sound of the piri represents the spirit of the Korean people. “It embodies endurance. The sound seems to die down, yet continues. It also symbolizes our strength as there is power hidden in the mild sound,” he said.
Two of the six piri players who will perform at the Piri, New Frontier concerts are female flautists Hwang Se-won and Ahn Eun-kyung.
The piri is usually considered a man’s instrument. Women were forbidden to play it at court performances.
“A Tour de force in Korean Dance” is another notable feature of the Namsan Tour of Korean Music. Eight veteran female dancers in Korea demonstrate folk, court and ritual dances at these performances.
“Korean music has always been accompanied by beautiful dance,” said Jang Seung-heon, a dance professor at Kookmin University. “The performers who are in their 40s and 50s choreograph their own their dances.
Some are purely traditional, some are reinterpreted into modern dance.”
Jang provides a commentary during the shows, giving audiences information about the meaning of the dance and relevant stories.
“Traditional dance is not something people get to watch every day,” Jang added.
Namsan Gugakdang opened in November last year in Namsan Hanok Village, and the Tour of Korean Music program started in March and is one of the representative programs.